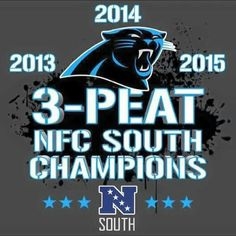 You know the saying, every dog has its day?

I wonder what they say about cats, because the Carolina Panthers have had their day for quite some time now with no real end in sight.

The other teams in the NFC South have been plagued by awful defense, constant head coaching changes, and near historic collapses.

For the Panthers, it's been a pretty cushy road into the playoffs the past few seasons, thanks to player development, a stout defense, and, of course, Cam Newton.

For the other three teams, it's been enough to make their heads spin.

While Carolina has flourished atop the division, the other three needed this off-season to make the necessary moves to become contenders.

Whether or not they have remains a matter of conjecture.

Without further ado, let's dive into this preview and see how the teams are trying to make the NFC South great again.

Its been hard for players and fans alike to be rid of the bitter taste left by the loss taken in Super Bowl 50.

For fans who crawled under a rock to grieve, it's time to come out now.

Although, I'm quite certain Cam Newton still won't talk about it.

Dude may still be having nightmares about Von Miller.

Things haven't been easy for the Panthers after their decision to let star cornerback Josh Norman walk, leaving gaping holes in the secondary in addition to Charles 'Peanut' Tillman's retirement and veteran Roman Harper's departure back to New Orleans.

Carolina decided to address this glaring need in the 2016 NFL Draft, where they spent the majority of their picks on potential and hope for the cornerback position.

The only problem with that is they're leaning on question marks and what ifs at a critical position.

To make matters even more interesting, not everyone seems to be gelling very well on the practice field.

Could the Panthers be in need of another veteran presence in the secondary?

Could this team make another run at a division title?

The positives may outweigh the negatives this offseason for the Cardiac Cats. They'll get stud receiver Kelvin Benjamin back from an ACL injury that derailed his 2015 campaign, and they will feature first-round draft choice DT Vernon Butler in a front seven that was one of the scariest in the league last season.

With a tougher schedule in 2016, it's hard to say the Panthers can make the same miracle run they made last year. However, there's no reason to believe they won't be one of the best teams in the NFC ... again.

The Bucs have had one winning season in the seven years since the Jon Gruden era ended and have missed the playoffs every year since.

Three head coaches have come and gone since Gruden, and it's no wonder this dude's embarassed to show his face as a fan.

Fear not, Tampa Bay fans, for Dirk Koetter is here to save the day!

Koetter is one of the few descendants of German immigrants who's kept the proper pronunciation intact: kuh-tter. Unfortunately, that's not gonna help him coach a team that drafted a kicker this year as one of its top three picks.

Actually, dude may want to keep the bag on his head, after all.

The Bucs had an active off-season, using their two picks ahead of the struggling kicker on CB Vernon Hargreaves and DE Noah Spence to strengthen a defense that had its moments last season.

Toss in free agent signings Brent Grimes, Daryl Smith and Robert Ayers Jr, and you have a defense that looks a lot scarier than it did a year ago.

Now, if they'd just realize that S Chris Conte is not a good football player.

I know, Kobe, the irony is off the wall.

Offense is Koetter's specialty, and a year ago, he coordinated a group led by Jameis Winston that may have surprised many who thought the kid outta Florida State would be a bust.

The No 1 overall pick in the 2015 NFL Draft threw for over 4,000 yards and had 28 total touchdowns in his opening season.

Not bad for a rookie.

Plus, it helps when your offensive line keeps you upright more than Cam Newton. Winston was sacked 27 times vs Newton's 33 last season.

With the Twin Towers ready to step up and a happy, healthy Doug Martin back in the fold waiting to gobble up more carries, Koetter, Winston, and the Buccaneers' offense have a recipe for possible success going forward.

Now it's time to see if these pirates can right the ship.

When will the Atlanta Falcons catch a break?

After a seemingly stellar start to the season at 5-0 a year ago, the Falcons finished the 2015 campaign in the middle of the pack.

Now, its definitely an improvement over the 6-10 season in 2014, which was the last under Mike Smith, but for new head coach Dan Quinn, I think the Falcons were expected to finish the season just as strong as they started it.

Well, they didn't and much to the surprise of Dan Quinn fans everywhere, the defense failed to impress under their defensive-minded head coach.

While Atlanta wasn't nearly as historically awful as New Orleans, they still struggled with their pass rush, ranking last in the league in sacks with 19.

They haven't done much to bolster their front, either, using zero draft picks on defensive linemen and adding noteworthy signings of Darryl Tapp, Derrick Shelby, and Adrian Clayborn in free agency, the latter of whom is currently injured.

The bright spot on defense this off-season is their 21st overall pick from the draft Keanu Neal out of Florida.

No, not that Keanu.

It was a brilliant move but, like the Falcons' luck would indicate, Neal was injured in pre-season play, and it looks like he won't be back in time for the start of the regular season.

On offense, the duo of Matt Ryan and Julio Jones should be a force to be reckoned with. Right?

Apart from Jones catching 130+ balls and Ryan throwing for 4,500+ yards a year ago, the Atlanta offense was just ... OK.

Ryan threw the second-fewest touchdwons of his career (21) and the second-most interceptions (17).

Devonta Freeman emerged as a potential star in the backfield but struggled mightily towards the end of the season. Dude barely cracked four yards per carry.

As a cherry on top of the crapcake, Julio Jones recently had an injury scare that left Falcons fans holding their breath.

Seems like they may have shut the door on their all-time leading receiver's return a little too soon.

Hopefully, the signings of star center Alex Mack and wide receiver Mohammad Sanu can help these Dirty Birds fly in the right direction for a change.

Otherwise, the fall from the nest is going to be a hard one.

The Saints did themselves a favor at the end of last season by ridding themselves of defensive coordinator Rob Ryan.

Some would say he's responsible for New Orleans' historically bad defenses the last couple of seasons.

I'd agree with that. Sorta.

It's yet to be determined whether replacement Dennis Allen is capable of a complete defensive overhaul, but he has new help along the front four, thanks to free agency and the NFL Draft.

The Saints were close to the NFL's bottom in sacks a year ago, so a bolstered pass rush may just be what the doctor ordered.

Now, they just need to avoid moments like these:

On offense, the team finally realized its need for a receiving tight end after trading Jimmy Graham and signed Coby Fleener to a long-term deal.

By no means is Fleener an upgrade over Graham in what passes for the Saints offense, but he'll compete for tight end supremacy in New Orleans.

The stars of the 2009 Super Bowl team have either departed or aged considerably, some even retiring this off-season.

Even Marques Colston got his walking papers after last season.

A Sean Payton extension was a no-brainer, but a new contract for Drew Brees hangs in limbo due to his age (37) and his arm strength.

The team from the Big Easy is looking ahead at a season that may be anything but.

Remember to check the Bovada data tool on our Home page for up-to-date NFL stats of interest to those who like to add a bit of spice to their viewing.

Here's a small example of what's there now as pertains to the NFC South: