Peyton Manning Yuks It Up with Rocky at a Nuggets Game 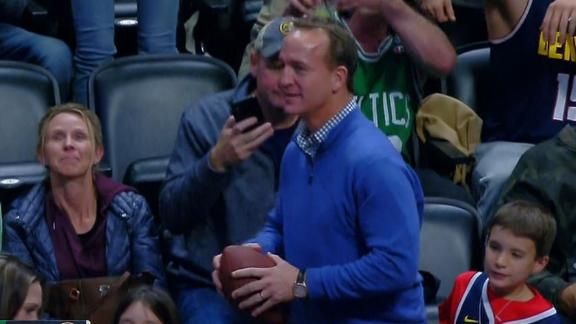 The two-time Super Bowl winning QB and Papa John apologist clearly has quite a bit of time on his hands these days, so filling the hours must be challenging.

Recently, the former Bronco was spotted kicking back at a Nuggets game, because why not.

Unfortunately, his relaxing evening was rudely interrupted by the disruptive antics of a diabolical creature named Rocky.

Indeed, they simply weren't going to allow Peyton to just sit there and enjoy the game with his kids.

Brace yourself for some family-friendly courtside shtick:

First of all, that's a very solid Nelson Agholor joke.

That being said, there's an awful lot happening in that clip, from Peyton clearly not wanting to throw that football, to nearby fans groping desperately for their phones when it became clear that he was in fact going to participate.

Oh, and watching the young Manning offspring transition from sheer joy at seeing Rocky to bitter disappointment after the drop was a special treat as well.

And about that drop.

The man inside the Rocky suit is no doubt filled with shame at the moment.

Here's an aerial view of his public embarrassment:

Anyway, Peyton seems quite fond of his second and final NFL home:

Peyton Manning is still pissed at Irsay for cutting him... retired as a Bronco, goes to almost every one of their home games, now at a Nuggets game... apologize, Jim. Fix this. https://t.co/HUc8DnzQTG

Speaking of the worst.