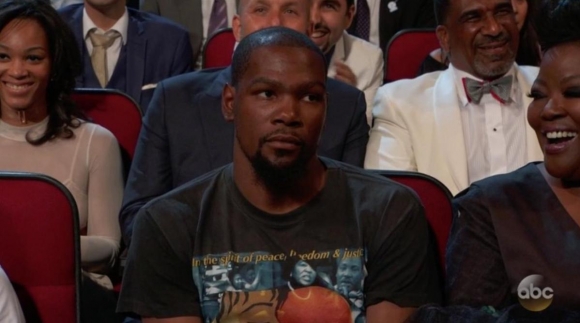 Most award shows are completely pointless and function only as a group ego stroke in public.

The ESPYS are without question one of them.

However, there's a certain train wreck quality in each, as there's always the chance that someone will get pissed off or embarrassed.

The annual ESPYS was held this past week, and that quick-witted Peyton Manning was slinging zingers all over the room.

One of his wacky riffs was directed at Golden State Warriors stud Kevin Durant.

Apparently, it was a bit too on-the-mark.

Come now, dudes, we really must lighten up.

Some reports have suggested the possibility that Durant and Westbrook were in on the fun, so hopefully those deadpan reactions were simply part of the show.

Besides, these two dudes have a pretty good thing going at the moment -- particularly Durant -- the NBA Finals MVP and selfless hero in Oakland.

Again, the ESPYS are at peak entertainment value when things get awkward and uncomfortable.

Perhaps the best example of this was back in 1998 when Norm MacDonald hosted the absolute hell out of the show.