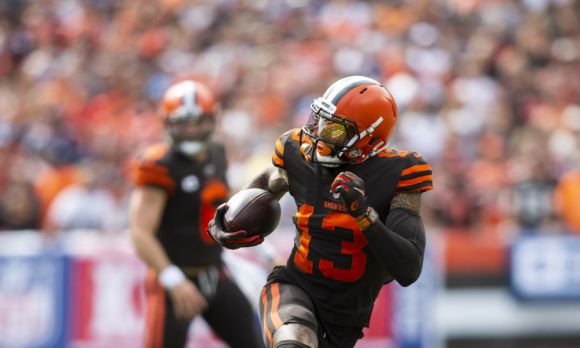 While his new team absorbed quite the beating at the hands of the visiting Titans, OBJ had a pretty good day, hauling  in 7 balls for 71 yards.

He also went public with his current relationship.

Yes, the All-Pro WR has found love again, and it seems that he still has a thing for inanimate objects.

OBJ's new life partner is a $350K Richard Mille wristwatch, which he actually wore on the field during the game.

You may recall the former Giants' star-crossed romance with a kicking net back in New York.

It was on again.

We were rooting for those two crazy kids, but it just didn't work out.

Clearly, OBJ has matured these past few years and now seems ready for a more stable relationship.

While not gold, the watch in question is quite striking:

Sadly, the NFL is trying to keep this delightful pair apart, but our hero remains undeterred, insisting he will continue to be with his one and only during games as well as in the shower.

You could just tell he was thinking about the watch, though.