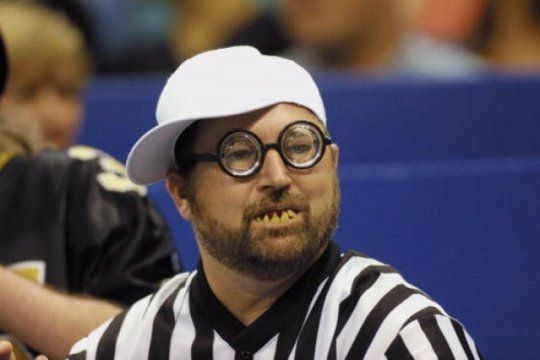 At this point, doom-stricken New Orleans Saints fans probably just assume their team is going to get dicked over.

With the first game of the 2019 season in the Superdome on a Monday night, there was more attention being paid to the officiating crew than usual.

This of course is a byproduct of the criminally negligent no-call in the NFC Championship Game that likely cost the Saints a shot at the Patriots in the Super Bowl.

Because of the circumstances, you'd think dudes would be on their best behavior, but you'd be mistaken.

While thIs particular crew might actually give a shit about the rules, they certainly didn't seem to understand them last night.

Fun fact: Michael Thomas has never dropped anything in his life, not even a call @Cantguardmike pic.twitter.com/KioluBkJZa

Now, after this play is when things went sideways, with the refs taking forever to eventually get it completely wrong:

Unless I am crazy, they really mishandled the replay. They should have reset the clock to 41 seconds and then run 10 seconds down to 31. That took 15 seconds away from the Saints.

For the record, Mike Pereira is perfectly sane.

These nimrods had the run-off or time out option right, but failed to reset the clock.

And of course, the Saints had actually gotten the first down on the play that they stopped the game to review in the first place.

Since the play was reveresed to a first down, the game clock should have been reset to the time on the clock at the end of the play and 10 seconds run off from there. It appears the runoff occurred from the time the game was stopped for review. #HOUvsNO

The Saints eventually missed a 56-yard field goal, which would have very likely been closer had the officials not goofed up the clock.

New Orleans did eventually win, 30-28, over the Texans in an absolute thriller, but these sinister referees seemed to be hellbent on sabotage.