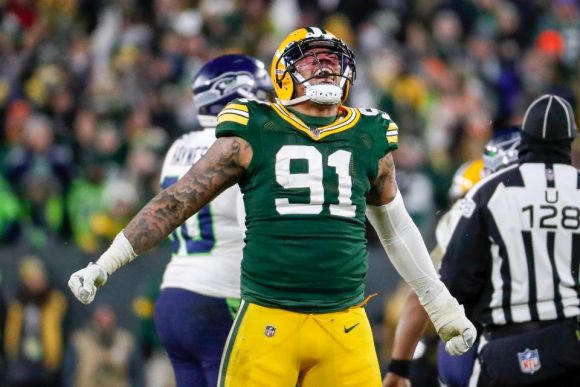 Amazing comebacks can and do happen in the NFL playoffs, but they're obviously easier said than done.

Frankly, give the Seattle Seahawks credit for digging themselves into an 18-point hole at Lambeau Stadium in this one. Turning up turf when the game-time temperature's 22º was no mean feat.

So was trying to get out of it, what with Green Bay's rejuvenated defense and what's now a clutch third-down offense.

They sealed the deal in a 28-23 Packer victory that set up a rematch with those top-seeded San Francisco 49ers in the NFC Championship game.

It was the Aaron & Aaron Short-Game Show for Green Bay:

Aaron Jones powers through for the one-yard touchdown!@Packers take a 14-3 lead with 9:49 left in the half. #GoPackGo #NFLPlayoffs @Showtyme_33

Dude got the benefit of the doubt on 3rd-&-Goal.

If this was any other team but Seattle, the thing to say would be somehow, they stayed close through all that.

However, since it was the Seahawks ...

Russell Wilson making plays out of nothing. #Seahawks #NFLPlayoffs

Dude positioned his crew to get a pair of 1-yard paydirt plungers from Marshawn Lynch and this little number to Tyler Lockett:

.@DangeRussWilson and the @Seahawks answer!

There was a special brotherly moment, too, when the Griffin twins met at the corner of Rodgers and Sack:

But really, the Pack earned their cushion, spent some of it on the Seahawk charge, and then cashed in the rest on 3rd-down surges like this:

Packers coach Matt LaFleur has made the offense less Rodgers-centric, which in games like this, then enables him to be more like Rodgers in his prime.

Seattle's adjustments to defend the rush, for example, created more 1-on-1 pass coverage, and Green Bay feasted on those plays.

Then there were capitalizing on tendencies. LaFleur put wrinkles in some of Rodgers' favorite pass patterns and caught Seattle's secondary anticipating.

This happened on Davante Adams' first TD. Dude looked to be running a staple from the Mike McCarthy era, a slant-flat, an outside receiver runs inside, while an inside receiver runs to the outside, hopefully confusing defenders. Seattle bit on it and lost:

What's more, with the lead, Green Bay made the most outta the field's middle third, like this Jimmy Graham route that, basically, was the ballgame:

Jimmy Graham : 3 catches for 49 yards on 4 targets (Picked up 9 yards on 3rd & 9 with this catch to essentially end the game. Green Bay was 9-14 on 3rd down) pic.twitter.com/TEmyAfilIv

Of course, it was officially a first down. In reality, maybe it was; maybe it wasn't. However, that's not the point.

Why leave the game in someone else's hands?

Why in the name of all that's ballsy did Seattle meekly punt to set up a possibility like that in the first place?

Pete Carroll can be furious with the spot but that’s not going to change the fact that he chose to rely on his defense instead of one of the greatest quarterbacks of all-time. That punt was inexcusable.

Last year, Seattle lost a playoff game to Dallas they should’ve won because they stubbornly kept running the ball.

They have Russell Wilson, and they call games like they have Blake Bortles. Awful.

Maybe, 'way down deep within his psyche, Pete Carroll got cold feet about passing in crucial situations after calling the dumbest play in Super Bowl history.

That debate can start now. Again.

Meanwhile, the Packers are getting set for a bitta California Dreamin'.