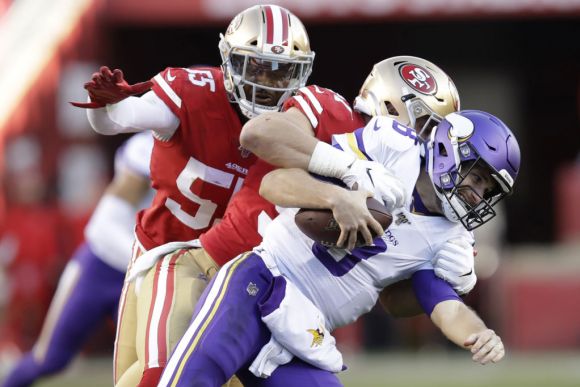 So there the Minnesota Vikings were ...

Turns out the San Francisco 49ers would do that all by themselves, to the point the Vikes probably wished they'd had a bye week.

Not the way the Niners went about their business.

Led by a defensive effort that made the term stout seem too soft of a description, San Francisco justified their top seed by thoroughly and totally trouncing Minnesota, 27-10.

The #49ers are the first team in NFL history to have five first-round picks with at least one sack in a playoff game, per @espn and @EliasSports pic.twitter.com/4ULSm07Ucq

That was the flashiest stat, but other standouts included:

When the outcome was theoretically still in doubt, one of those passes landed in the hands of Richard Sherman:

That's what happens when you throw at @RSherman_25 😏#WPMOYChallenge pic.twitter.com/uiLO6gwnvC

Dude's an OG in CB years, but slingers need to be on their game more than Cousins was if they're gonna beat him.

That was the only time the Vikings tested his island, and being real, it was the disastrously wrong time. The resultant short-field possession led to a house call, a 24-10 lead and basically ...

Along the way, when San Francisco wasn't stopping Minnesota, the Vikings were stopping themselves:

The Niners didn't really need to do anything spectacular because their o-line was manhandling Minnesota, too. Their longest run from scrimmage was 11 yards by Tevin Coleman, part of his 22-carry, 105-yard workout.

Jimmy G made that look EASY 😯

And looking the part.