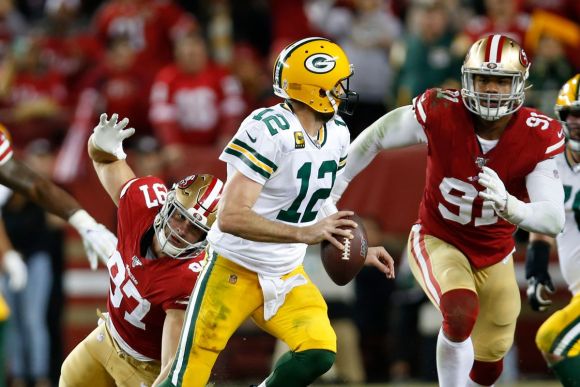 Just like the AFC Championship game, this battle for a spot in the Super Bowl features a regular-season rematch.

The question here, though, is whether it'll be another mismatch.

The San Francisco 49ers earned the NFC's top seed for a reason, and no team knows that better than Green Bay.

What happened to the Packers then can best be summed up in a mere two seconds:

It was a sunny day on Sun 24 Nov in the Bay Area everywhere but on the visitors' sidelines at Levi's Stadium, as the Niners hosted a demolition, 37-8:

As always, computer simulations have been run, and here are those conclusions: They've now got balance on offense with a solid rushing attack from Aaron Jones. He should have some success against San Francisco’s defense. If he doesn’t, no worries, because it's highly unlikely that Rodgers hasn't learned from the first game.

Why bet on San Francisco ...

Putting it mildly, the 49ers are rested and rolling. The playoff bye week recharged their batteries -- as if it was needed -- and they're coming off total domination of the Pack's NFC Northern foe, Minnesota, where Garoppolo only needed to be functional.

Tevin Coleman’s 22 carries for 105 yards and two touchdownswas his busiest day since rushing 20 times in mid-October. His emergence only strengthens the 49ers’ advantage against Green Bay's front seven. The Packers rank 23rd against the rush and have allowed 5.2 yards per carry over its past three games.

DE Dee Ford is back from a hamstring pull, and his combination with Nick Bosa is going to make life hell for the Green Bay o-line.

While it's exceedingly difficult to beat the same team twice in a season, San Francisco could be an exception. However, for our purposes, Green Bay doesn't have to beat the 49ers; they've just gotta stay close. That's a strong possibility.

The Packers have become increasingly comfortable withe Matt LaFleur's system. Defensively, they haven’t allowed a team to score more than 23 points since that loss to San Francisco. As well, Rodgers likely won't have another worst game of his career. With a trip to the Super Bowl on the line, they'll have more than redemption fueling their competitive fire.