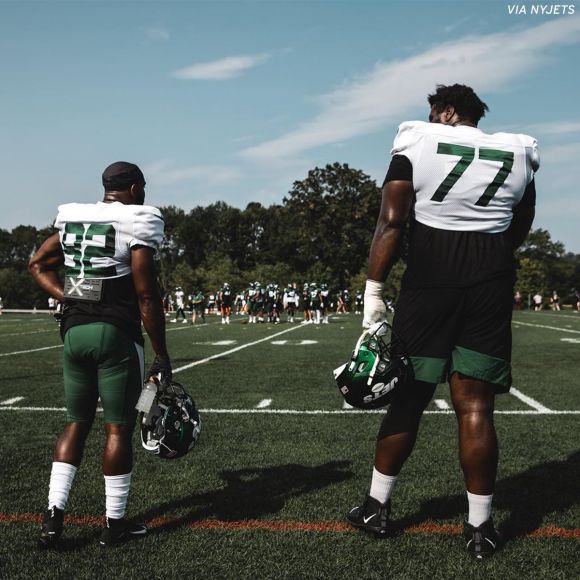 Humor can be mined from an infinite number of sources and interpreted in a variety of ways.

It can be extremely nuanced and force one to contemplate universal themes of life, death, and purpose.

Of course, sometimes it can simply be visual and painfully obvious.

Which brings us to a recent New York Jets practice.

You see, a monster by the name of Mekhi Becton was selected by the Jets in the first round of the 2020 NFL Draft.

Dude checks in at a healthy 6-foot-7, 364 pounds and -- without any trace of irony -- plays the position of offensive tackle.

We can only hope you've put the pieces together by now,  because the set-up portion of our show has come to an end.

Don't talk to me or my son ever again. pic.twitter.com/uM0D1sY7jJ

For those still not grasping the concept, the big dude dwarfs the small dude.

And the contrast is sharp because they're standing right next to each other.

It really is quite the photo, inviting speculation that the pair were once both men before Becton evolved into something else entirely.

Others seem perplexed as well:

This picture makes no sense my head hurts

Shit, it appears to have caused Matt to develop a headache.

Is this a real picture

And Cleo doesn't even believe it.

this is the Judge Altuve picture 2.0

The only thing that could've made the trippy Jets photo more surreal would've been head coach Adam Gase off to the side with his eyes darting wildly in abject terror.

He just needs to secure that pesky taco first.