Clay Matthews Would Just as Well Forget About Thursday Night 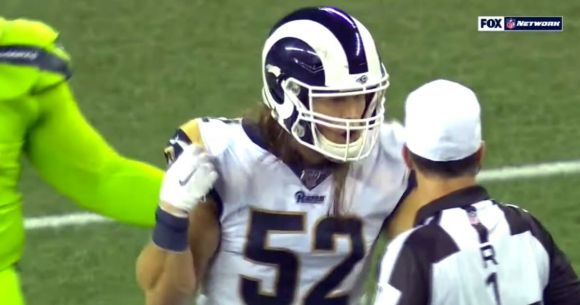 The Los Angeles Rams lost to the Seahawks in Seattle on Thursday night, which of course is nothing to be ashamed of at all.

However, on a personal level, Clay Matthews didn't have the best of evenings.

The longtime Packer and brand new Ram got flagged yet again on one of those ambiguous roughing the passer calls.

Yep, here's Clay having another piece of his soul ripped from his body:

Christ, he may as well play for the Saints.

Obviously, this shit call led to the Seahawks game-winning TD, so cheers to another fine interpretation of the most convoluted rule book on Earth.

Those observant folks on Twitter correctly pointed out that Matthews appears to be the target of a vendetta:

“If Clay Matthews did it then it’s a penalty.”

Apparently Clay Matthews is not allowed to burp within smelling distance of a QB. #Seahawks #Rams

You may recall other egregious calls directed at this tortured man, like this abomination against Kirk Cousins and the Vikings last season:

So there's the insult.

Now for the injury.

Matthews broke his jaw during the game and will miss at minimum of one month.