Published on 6-Feb-2020 by Alan Adamsson 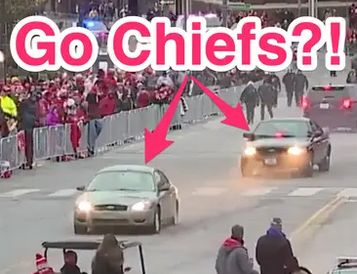 Somehow, this has gotta be down to the fact that a Kelce was involved in the festivities.

Back when the City of Philadelphia was celebrating the Eagles' triumph in Super Bowl LII, center Jason Kelce went above and beyond the call of being weird by adding a bitta je ne sais quoi pizzazz to the parade and surrounding proceedings.

So, should we have expected anything less from a celebration that included his brother?

If that soliloquy didn't come with an ABV label, crime pays.

Who knew Kelce was keeping with a theme that was established by a sorta pre-victory-parade parade with lots more flashing lights?

In yet another example of life imitating art -- obliviously, of course -- some random dude who shoulda had his own ABV label musta been using the same GPS system as Bugs Bunny:

Somehow, dude wound up in the Chiefs' parade route before the procession began.

When he backed up and tapped into a cop car, he clearly became the latest to confirm Newton's Third Law of Motion -- kinda -- and took off in the other direction:

Kinda cool how the crowd lining the street just sorta took it all in with absolutely zero thought given to the possibility that if dude could swerve into a cop cruiser, he could just as easily done the same into the street barriers.

And kudos to the Kansas City Fire Department for extending the impromptu motorcade by adding their mini-vehicles to it.

Cue the play-by-play, where an apparently textbook-style PIT maneuver is highlighted:

This is really incredible work by @41actionnews. pic.twitter.com/6CFGN97rta

Somewhere, dude drove over a strip of spikes, so his car's rims wound up in about as sorry shape as he was.

Then, for him at least, it got sorrier.

Then again, everyone from those neighborhoods looked like they turned out for the main event, which featured super-slinger Patrick Mahomes II firing souvenir Chiefs footballs into the crowd.

Unfortunately, one of them came too close to the Nickell Robey-Coleman memorial parking meter:

And with the first pick in the 2020 draft pic.twitter.com/DEa79mNIKH

No such issues when Mahomes found one of his favorite targets, though:

No wonder Kelce was so lubed up for that post-parade speech.

All in all, not bad for a day's revelry. It damn near approached what the Washington Capitals achieved as a celebration that will grow to mythical proportions as time goes on.