Pads Appear to Be Optional at the Marshawn Lynch Football Camp 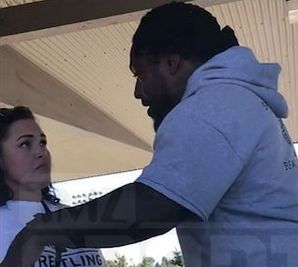 It's never a bad idea to check in on the comings and goings of Marshawn Lynch.

While his NFL playing career is probably over for good this time, the inexplicably popular former RB still manages to find his way into the news.

For example, Lynch is running a football camp in Seattle and seems to be hopelessly stuck in Beast Mode mode.

Apparently, this mentality has caused some consternation among the mothers of the little beasts in attendance.

Yeah, it's going to get worse before it gets better.

It seems that the skilled golf cart operator decided it would be a swell idea to have the kids perform some contact drills sans pads.

Now, there are still some folks out there who dismiss the science behind football head trauma, but surely we can all agree that kids without pads shouldn't be slamming into one another.

Anyway, when some of the kids exercised free will and common sense by refusing to participate, Lynch did a little cussing and forced the kids to run laps.

Suffice it to say, some of the parents weren't pleased.

A hearty thank you to the always helpful TMZ Sports along with the diligent folks who filmed that riveting footage.

The optics were extremely poor with Lynch chasing the woman into the stands, but he did sorta apologize at the end of the clip in his own unique way.

But if you enjoyed that footage, this one will really blow your mind:

Of course, he'd just as soon speak to a man.

Hopefully, the kids received some Skittles in addition to the misogyny.