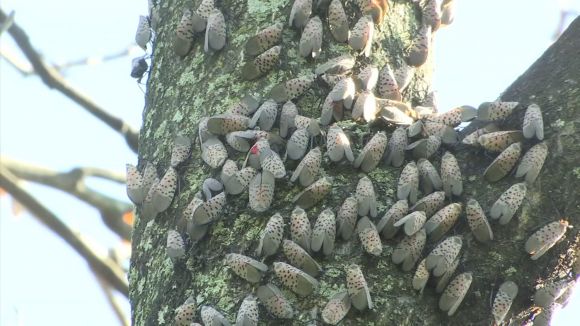 Of course, there was the regularly scheduled Big Ten contest against Purdue's Boilermakers.

Unfortunately, we were also privy to the continued battle with the tyrannical spotted lanternfly.

An explanation is probably in order.

This invasive species has apparently been terrorizing southeastern Pennsylvania since 2014, with no relief in sight.

Scientists at the university have been working feverishly to get these little bastards under control:

It seems that a couple of these nasty buggers were spotted at the Nittany Lions' last home game three weeks ago, so local officials aren't taking any chances.

Fans attending today's game were asked to thoroughly examine their vehicles as well as their own person out of an abundance of caution.

These insects aren't screwing around.

Brundle Fly would be much more difficult to deal with.

Fortunately, there were no sightings today at Beaver Stadium, and the home team took care of business to the tune of 35-7.

While his expertise is specifically related to bees, perhaps Ned Yost could provide some insight.