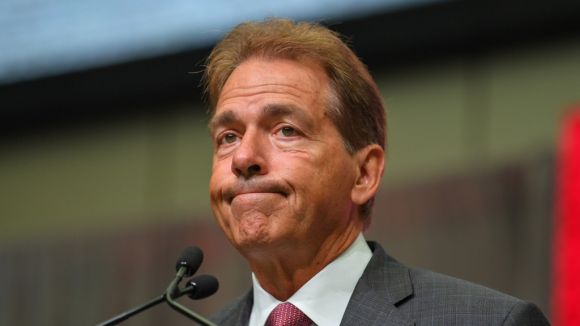 We've reached the traditional point in the college football season where Nick Saban gets super-defensive when fielding questions about his program's schedule.

This annual rite of passage played out once more after the Crimson Tide won, 62-10, over a probably traumatized New Mexico State team.

Of course, this is one week after Alabama held on for a 42-3 win over notorious football factory Duke.

The non-conference slate doesn't get any easier later this season, with home dates against Western Carolina and Southern Miss looming.

Let's listen to a frightened reporter try to delicately broach the subject with Saint Nick:

Obviously, this juggernaut isn't afraid to play anyone, but his answer smacks of bullshit.

His condescension aside, Alabama could very easily schedule a home-&-home series with a program such as Texas, whom fellow SEC power LSU played last week and will play again in 2020.

He simply doesn't do it.

And the optics on this victim mentality are quite poor.

And apparently for Coach Saban.

It's unclear if his wife disciplines him for the weak schedule, also.