Hawaii Recruits a Fifth-Grade QB; Nevada Gets Even Sillier 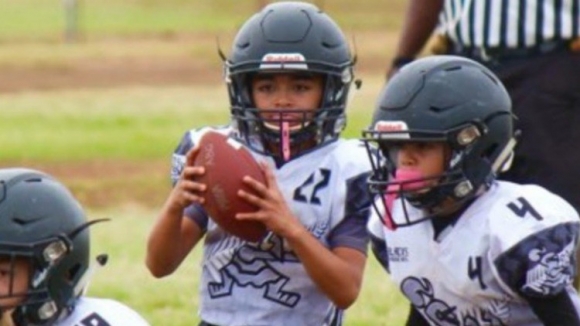 Alright, this is getting ridiculous.

The University of Hawaii has made a verbal offer to QB Titan Lacaden.

While such an announcement may seem perfectly normal on the surface, it's actually quite the opposite.

Titan Lacaden is 11 years old and in the fifth grade.

Yes, the Rainbow Warriors and head coach Nick Rolovich are clearly 'way ahead of the curve in regard to recruiting and have no qualms about brazenly dipping into the vast pool of grade school talent on the island.

The Lacaden clan is pretty fired up about it.

By the way, how cool is this kid's name?

The little dude almost has to be a QB with that handle.

Of course, the child prodigy will not be suiting up for the Rainbow Warriors next season.

He's got sixth grade to contend with.

Hmmm, he seems okay, but clearly much too old.

While Hawaii appears to be fairly progressive on the recruiting front, perhaps they were simply watching Lane Kiffin.

That visionary head coach of the juggernaut that is Florida Atlantic University has been rather busy himself recently, making offers to two different grade school QB's.

Is imitation the sincerest form of flattery?

Kiffin would no doubt agree.

Frankly, it's getting creepy. Sorta like stage moms putting their little girls in beauty pagents.

Can we say disturbing?

Now, for the boys, maybe it's a different source of race to the bottom being glorified.

How does the University of Illinois -- an alleged Big Ten program -- drag itself into this absurdity?

Are Notre Dame, Northwestern and/or Indiana edging them outta the off-season headlines? Don't think so.

And all the Illini had to do was lay low to be better than the Chicago Bears.

The sinkage gets worse.

Now the low end -- in every sense -- of college football scholarships has hit single digits:

Don't those portraits look damn near as lost childhood as that 8-year-old girl's?

Who the hell is doing this?

The source of those tweets: former Louisville Cardinal and Tampa Bay Buccanner WR Mike Evans. He's running free football camps in Galveston, where he grew up.

Dude says it's his way of giving back.