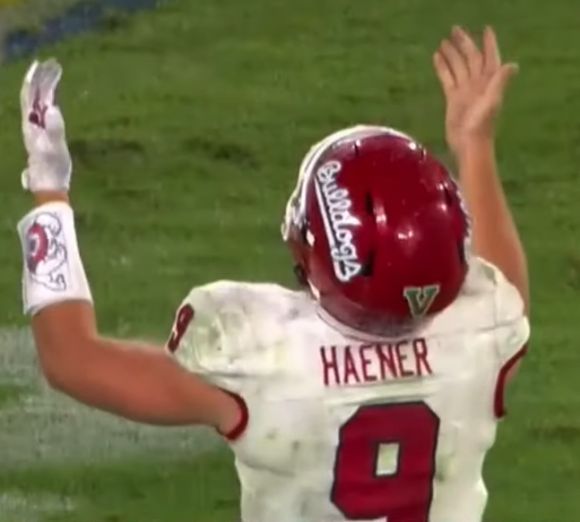 With one exception, it seems like the Pac-12 can't get out of its own way.

And that exception would be UCLA's secondary.

What else can explain the Fresno State Bulldogs mounting not one, but two TD drives of more than 70 yards in the game's final seven minutes -- with the winning drive happening in only 40 seconds -- to post an improbable 40-37 victory to extend their winning streak over the Bruins to four.

Dude landed in the Valley after being edged outta the starter's role at Washington in 2019 by golden boy and local hero Jacob Eason. Then-coach Chris Petersen said Haener would get his shots during the season, but he didn't stick around long enough to find out, immediately entering the transfer portal.

Turned out Eason lowballed the Huskies to an 8-5 record and declared for the NFL draft. Odds are strong Haener woulda been next man up had he stayed.

No knock against Dylan Morris, who actually became the next man at Montlake, but after the UCLA game, especially, Husky Nation's gotta be wondering what if.

Putting it mildly, Haener was sensational against UCLA. The stats have him going airborne 53 times and hitting on 39 of them for 455 yards and a pair of touches, but that doesn't begin to describe his night. Among other heroics:

UCLA QB Dorian Thompson-Robinson with RBs Brittain Brown and Zach Charbonnet were supposed to be the headliners in this one, behind the real stars of the show in an o-line that was Chip Kelly's pride and joy.

Fresno State was ready for them basically shutting down the Bruins' ground game:

Thompson-Robinson had success in the passing game, going 14-24 for 278yd and 3 TDs, but it wasn't enough because his mates on D couldn't stop Haener & Co:

Fresno State played Oregon tough in the Ducks' season opener. Prevailing sentiment was the Quackers were looking ahead to Ohio State, but perhaps the Bulldogs were really dropping a hint of their season to come.

That's what UCLA thought they were doing when they poleaxed LSU in Week 1.

So now, before the calendar even turns to October, could it be that the Pac-12 has assumed its usual position of being on the outside looking in for a College Football Playoff spot?

It hasn't even begun to eat its own yet, which is damn near a conference tradition.

Already, the Pac-12 is down to one undefeated team, and Oregon's schedule has some likely road hurdles:

Meanwhile, it seems like USC will do just fine with whomever's coaching as long as Graham Harrell is calling the plays.

And after beating Arizona -- OK, that's a gimme -- Utah, and Arizona State, all BYU has to do is knock off the Trojans and they'll win the Pac-12 South.

Haener's performance against both the Ducks and Bruins has revealed that both those teams have the same issue that Oregon exposed against Ohio State:

On too many plays, opposing receivers have damn near been able to establish their own zip codes.

It's why Oregon's games against the Cardinal and Huskies are going to be intriguing. At least, until kickoff.

As to the Bruins -- and possibly the Trojans when they meet the Bulldogs later in the season -- they've gotta hope Fresno State keeps it up to boost their strength-of-schedule factor when the CFP Selection Committee convenes.

If State does keep it up, they'd stand a chance of superseding Cincinnati's Bearcats as the Other Five's best shot at cracking the CFP's four-team bracket.

Then again, it's only September. If the Bulldogs have proven anything, it's the obviosity that this season, like most others in college football, is gonna be another one of those long, strange trips.