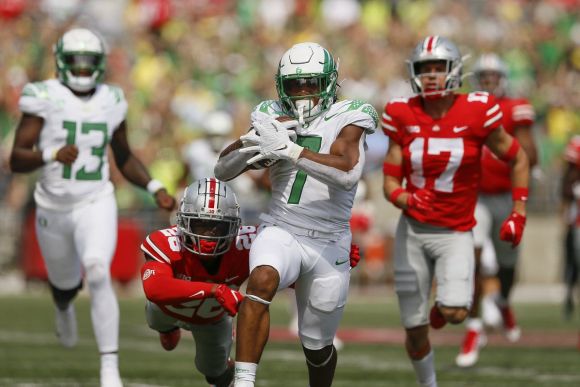 As far as Oregon was concerned, Upset was just a horse that happened to have a good day.

And Underdog is a cartoon superhero.

They're the Ducks, dammit, and underestimate them at your peril.

It's highly doubtful that anyone involved with The Ohio State University football program make that mistake. They were too busy spending 60 minutes of playing time hanging on for dear life.

The thing is, if a team finds itself constantly trying to catch up and complete a comeback, it needs to depend on its defense.

That's not been a strong point for the Buckeyes lately.

The Ducks didn't shred it as thoroughly as Alabama but took advantage of every glaring weakness that was exposed by Minnesota. Those weren't too tough to identify, either. Ohio State's secondary is suspect, and its dudes up front form a sieve.

From the Buckeye's perspective, anyway.

Oregon's secondary may be average at best, and the fact that defensive stalwarts Kayvon Thibodeaux and Justin Flowe didn't help. A lessened pass rush and the absence of an elite linebacker in coverage gave Ohio State's frosh QB CJ Stroud more room for error -- dude racked up 484 yards and 3 TDs on a 35-54 passing day -- but he made a glaring one in crunch time, an ill-advised lob that turned into a game-killing interception.

Meanwhile, the Quack Attack made itself known early and often:

Of course, those results were made possible by the power work of the crew up front.

Put it all together, and Oregon emerged from the Horseshoe with a 35-28 victory that never really seemed all that close:

Coupled with UCLA dominating LSU in Week 1, this now gives the Pac-12 two triumphs against Power 5 big brands. What's more, they've come with a healthy dose of physicality, an element that critics have held against the conference for years.

So, strike that one from the bias list come Selection Committee voting. The only way that changes this season is if Stanford and/or USC get rolled in the trenches by Notre Dame.

Something else seems to be shaping up in the Pac-12 that may weigh in its favor come playoff time, even though most in the conference won't like it.

In recent seasons, the level of parity may be debated, but nonetheless, it exists in the Pac-12. The last team to make it through the league schedule undefeated was Oregon in 2010. That's also their only playoff appearance, when they lost, 22-19 to Auburn.

The other Power Fives have consistently dominant programs where the Pac-12 plays musical chairs at the top.

This season could be shaping up differently, more in tune with the others.

Early indications are that the Ducks and Bruins are separating themselves from the pack.

If the conference title begins as a two-team race and stays that way all season long -- which will include a Duck-Bruin clash at the Rose Bowl on Sat 23 Oct -- national prominence will happen. It'll be viewed as a playoff-to-the-playoff, and that usually ends well for the survivor when CFP voting happens.

At this stage, the conference couldn't be more pleased with the scenario.

Oregon and UCLA will second that. For now.