CFP Fiesta Bowl: Clemson Claims a Snot-Knocker for the Ages 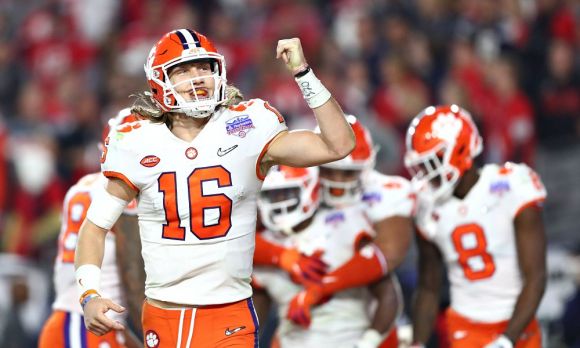 Gotta say, dude knew how to call this one over in the Daily Stake section.

In what can only be described as a battle royale between undefeateds Clemson and Ohio State, it ultimately came down to turnovers and accuracy.

In one key instance, this involved a turnover that wasn't, as it wound up being disallowed upon further review.

This was originally called a catch and fumble return TD, but was overturned as an incomplete pass. #CFBPlayoff pic.twitter.com/3RxiGYTvCv

No matter what the sport, they can bring in all the technology they want. Decisions are still gonna come down to human interpretation.

As a result, it remains more than evident that rules like completing a catch and pass interference are determined more as an art form than a scientific process.

The Buckeyes and their fans will likely see that play in their dreams for a long, long time.

The reality is, if that play stood, it woulda been more of a bailout for a Buckeye team that had more than enough chances to win.

As it was, a veritable plethora of opportunities went wanting, which is one clue why Ohio State fell to a determined and deserving horde of Clemson Tigers, 29-23.

In this case, it's a buncha dropped passes, broken routes, and drives that died in the red zone.

The Buckeyes powered inside the Tiger 20 four times in the first half, but Clemson held them to only one touch and a trio of field goals from 21, 22, and 33 yards out. In other words, subtract the 10 yards of the end zone and 7 yards between the line of scrimmage and the kicker's set, and twice Ohio State was turned away at the Tiger 4 and 5.

Include the other field goal, and that's 12 points left on the table, right there.

With the notable exception of LSU -- dudes leave damn near nothing on the table -- a team's gonna get only so many shots at house calls in a game. Ohio State's came early when they took it to Clemson so hard, the Tigers didn't know what hit them.

Full marks to their DC Brent Venable, who made the necessary adjustments to right the ship.

Meanwhile, the Buckeye D had a plan to stop Flash 2.0 -- aka RB Travis Etienne -- and it worked. Dude only managed 10 carries for 36 yards. So, the Tigers stopped handing off to him, flared him outta the backfied, and turned him into a receiver.

Damn right it was. Three receptions for 98 yards, with one being an electrifying track-meet-on-turf that went for a 53-yard touch.

You can't hit what you can't catch, so Etienne was fortunate to miss most of the violence on display out there. The hitting was beyond intense all night, as evidenced by the parade of players who were forced to the sideline for repairs and/or recovery before rejoining the action.

With that level of aggression, it was inevitable that a line would be crossed now and then. The Buckeyes got hit for eight penalties, costing them 77 yards as opposed to the Tigers' 6 for 47.

The most egregious of all was CB Shaun Wade, who got the gate for a clear target-hit on QB Trevor Lawrence.

Right after his ejection, Lawrence picked on his replacement, Amir Riep, who got PI'd to keep a drive going that resulted in the Tigers' first touch.

Somehow, it knocked more determination into the 6-6 slinger who normally runs enough to keep the D honest.

Surprisingly, Ohio State never did put a spy on him, part of why dude logged 107 yards on 16 carries, with the damaging scramble going for 67 yards and a crucial TD.

All that early Ohio State dominance had gone the way of the dodo bird. Clemson took over, and even when the Buckeyes managed a late comeback, dudes had the experience to regain control and put the game away.

But not without Ohio State committing one final error.

Not sure what it is about Clemson, but the Buckeyes are now 0-4 against them.

Maybe it's the curse of Woody Hayes after punching that Tiger linebacker back in the 1978 Gator Bowl:

Clemson showed the pedigree of a defending champion. This was far from their best game, too, but they found a way.

Much of that was due to their dealing with the breaks better than the Buckeyes. Because of that tenacity, they've earned the right to defend their title.