Snoop Dogg May Have Just Triggered Another FBI Probe at Kansas 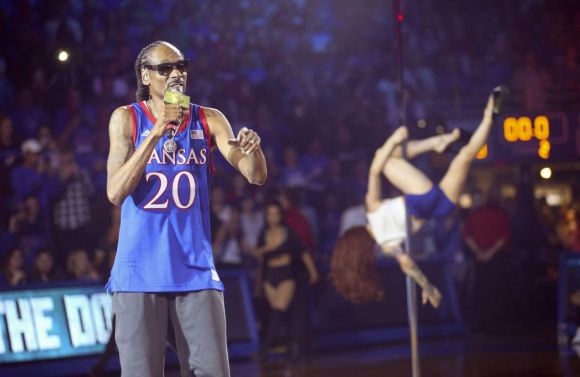 That Kansas hoops empire can't seem to get out of its own way these days.

The Jayhawks are currently one of the prestige programs being poked and prodded by an extremely thorough FBI task force.

With this in mind, you'd think these dudes might want to stay off the radar for a while.

And what better way to do that than inviting Snoop Dogg to your campus?

Bill Self and his student-athletes had their annual Friday night gathering at Allen Fieldhouse to kick off another season of collegiate hooping.

Uncle Snoop was apparently expected to close the evening's festivities with a relatively family-friendly version of his show.

In case you were wondering, that young lady was attached to a strip pole, for reasons that weren't made entirely clear.

At least not to AD Jeff Long, who was forced to issue a hasty apology that included a reference to what he called acrobatic dancers.

Apparently, the very old and very white Long was waiting on a circus that was never coming.

Instead, he got this:

Such an outrageous photo. pic.twitter.com/xorqGGMF8h

It was sure nice of Snoop to pass that massive blunt around to all of the alumni and boosters in attendance.

Coach Self was also appropriately outraged by the scene:

"I didn't know that there was going to be anything like that." pic.twitter.com/2V7K5spRXa

Has a human being ever been more uncomfortable?

It appears that Self left before the money gun was brandished:

October 4th: Kansas has stripper poles and Snoop Dogg shoot a gun full of money into the crowd at March Madness

They'll be fine as long as a Jayhawks player didn't try to pay for a meal with one of those Snoop Bucks.