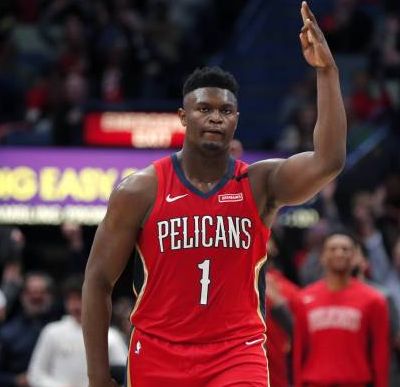 To the surprise of absolutely no one, the NBA is a better league when Zion Williamson is on the court.

It'll sure as hell help the New Orleans Pelicans, too, during games and at the box office.

Through no fault of The Brow, Zion's first game back after his knee injury gave a strong hint that he could actually make the Pels more relevant than AD did.

Understandably, coach Alvin Gentry took the cautious approach to allotting Zion game time because his job probably depended on it.

Alvin Gentry said the doctors said that was it for Zion Williamson midway through the fourth quarter.

“I ain’t the brightest coach in the world but I wasn’t going to take him out unless I was told to.”

Mathematically, New Orleans is within striking distance of a Western Conference playoff spot, but it's not like the players would be forced to cancel vacation plans in May or anything.

Dude posted some pretty cool numbers in only 18 minutes of action against San Antonio:

Mostly, though, dude put a charge into the proceedings that ironically made this seem like a playoff game.

Sure, the Spurs actually won this game, 121-117, but -- no offense to the regular season's significant or lack thereof in the grand scheme of things -- that was virtually an afterthought.

Instead, the franchise and its fans had visions of what Zion's limited performance could bode for the future.

Dude was a man-child out there, throwing his weight around for defensive rebounds, pushing the ball in transition, and finding teammates slashing to the hoop.

What Zion doesn't have in height, he makes up for in how he uses that Johnny Bravo physique of his ...

It's not a stretch to see that dude's gotta lotta Charles Barkley in him.

And it's beyond realistic to think that Zion's 17-point fourth-quarter outburst can be extrapolated to full-game performances.

All dude's gotta do is stay healthy. He'll raise his teammates' level of play, and who knows what his ceiling's gonna be?

No wonder everyone around him told him to go pro last spring, seemingly against his own wishes.