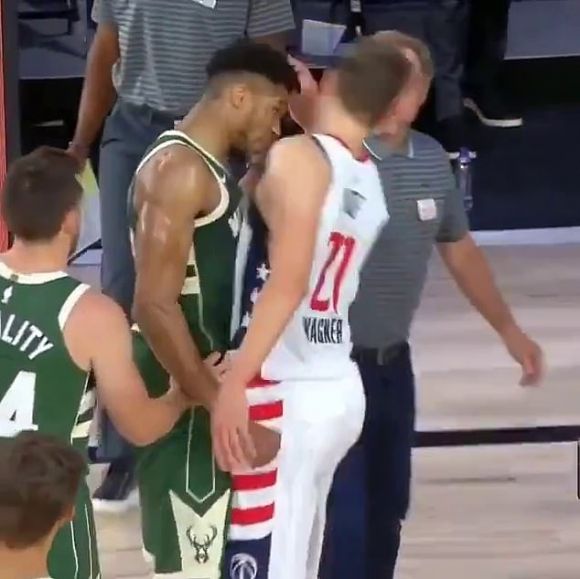 While the NBA playoffs have yet to begin, things are getting awfully feisty in the bubble.

Even the top-seeded Milwaukee Bucks seem pissed off.

Reigning MVP Giannis Antetokounmpo treated himself to an early exit recently against the Washington Wizards, but he was in no mood to enjoy the impromptu downtime.

The young German big had the unmitigated gall to draw a charge on Giannis.

Suffice to say, the freaky one was having none of this:

Unless our eyes deceive us, Giannis did appear to be the aggressor in this scenario.

However, in the interest of fairness, that might've been a blocking foul on the large German fellow.

As always, there was a rather large gulf of difference in opinion on the Worldwide Web.

Borderline between blocking foul (Moe was leaning slightly to his left) and "hard defense", but by no means it was a hard foul. What was Giannis complaining about to Wagner ? Bad call maybe, but I don't headbutt my opponent when ref doesn't whistle. And yes clear headbutt.

He’s mad because they guy took a charge on him?

Okay, perhaps there's a consensus for once, even though Giannis did express contrition afterwards.

Anyway, the Bucks got along just fine without their stud, taking down the Wiz, 126-113.

However, with the bubble-wrapped post-season approaching, it'd be preferable that Giannis stick around for the duration going forward.