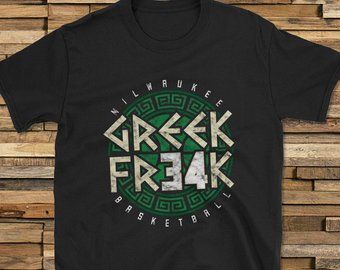 As sports nicknames go, the Greek Freak would have to rank near the top in both mass appeal and accuracy.

Giannis Antetokounmpo certainly seems fond of it, as he got his freak on last season to the tune of a league MVP award.

Sadly, we reside in a world filled with people who will flagrantly use other people for financial gain.

However, this world also includes concepts such as trademark law and copyright infringement.

Fortunately for Giannis, his legal team is much more adept at lawyering.

It appears some devious outfit called Viral Style was mass producing apparel with GREEK FREAK and GREEK FR34K plastered all over it.

Apparently, they even put antlers on an image of Giannis, transforming him into some kind of half man, half Milwaukee Buck.

The artist should probably be punished for that abomination alone, but Giannis and his representation are suing on the grounds of trademark infringement and an assortment of other violations.

The various damages could total up to $2million clams, but this is about the principle and good old-fashioned common sense.

Because you see, one really should get permission before using someone else's name and likeness for profit.

We should probably ask Joel Embiid about this trademark stuff, as he's well-versed on The Process and could provide more specifics.

In the meantime, don't worry about Giannis.

He's got some important FIBA World Cup business to handle.