Simmons Has Lost the Spirit of 76 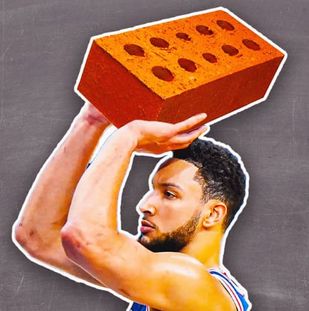 Well, at least the Philadelphia 76ers and Ben Simmons have one thing in common right now:

The 6-11 Man from Oz only recently allowed the matter to unabashadly go public, but the fact he'd decided it was time to exit the City of Brotherly Love seemed to have been made a while ago.

It's doubtful dude's doing his version of the Aaron Rodgers Gambit because even dumb money had the Green Bay slinger returning to the Pack.

Perhaps Simmons thought he'd caught a dose of Markelle Fultz Syndrome and noted the only cure was to get outta Philly, which apparently worked for the Sixers' former top overall draft choice.

Or maybe he just came to the conclusion that the town's just not big enough for both him and Joel Embiid.

The issue revolves around the undeniable logic that a basketball court has two ends to it.

And that dichotomy is down to Simmons.

Dude can't and/or won't shoot. Never really has been able to. Perhaps it's due to an overdose of Playground Slash & Dash where mid-range is non-existent. Perhaps it's been failing to work on his weaknesses.

The problem signs were there all season, but dude's cavalcade of clangs in last season's playoff struggles were the final frustrations that ultimately ran him outta town.

The hell of it is, the skills where Simmons excels are more than team-chemistry.

They're damn near alchemy.

But dude's gotta be a complete player.

That starts with belief in one's abilities, and where Simmons finds himself now is probably due to being mentally adrift.

For example, in Game 5 of that fateful Atlanta series that saw the top-seeded Sixers surprisingly tumble outta the playoffs, dude produced the ultimate brick:

Could that have been in the back of his mind when he opted for the ultimate non-dunk?

After the fact, Simmons accepted the reality of his flaws:

Ben Simmons takes ownership saying he did NOT do enough pic.twitter.com/WARbgkCtGo

PHILLY I LOVE YOU
Sorry to disappoint you again Just know that I gave everything I had knowing the circumstances. If there’s one thing I’ve learned being here, it’s the TOUGHNESS this city has and that’s why I played with a torn meniscus. THANK YOU FOR THE SUPPORT ALL YEAR LONG!! pic.twitter.com/CsR47xOJDZ

If that didn't drop enough of a hint about how he really felt, Embiid dropped all pretenses:

So, for all intents and purposes, Simmons was likely gone in June.

He gave the Sixers the summer to work a trade on the down-low, but it's not as if other teams don't see his flaws, too. Simmons wants a club to build its offense around him, and he's worked on his game all summer to the point that he even skipped the Olympics.

The question now is, who's gonna take the plunge and what will the Sixers accept?

It may be until the middle of December before something shakes out. By that time, Philadelphia will not only have a better idea of who's available, but how they're going to adjust their defensive schemes.

And being real, based on the work he needs to do to develop an NBA-worthy shot from both the field and the line, Simmons could use all the extra practice time he can get.