NBA Finals: Raptors Down Dubs to Win an Oracle-Style Title 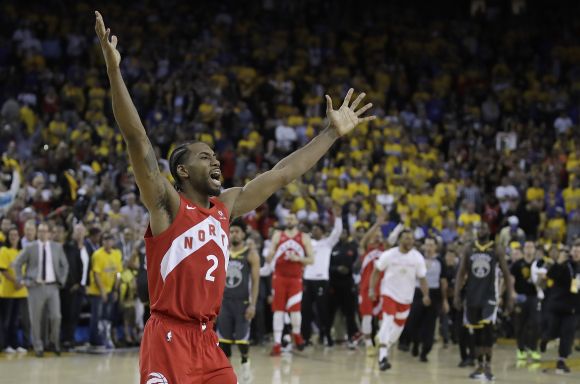 Not sure if this game marked the end of a dynasty or the passing of a spiritual torch.

It definitely delineated the turning of a page.

When the Toronto Raptors clinched their first NBA championship with a 114-110 victory, there was a feel that resembled a playoff game here back in 2007 when a feisty Golden State Warriors crew upset the dazzling Dallas Mavericks:

It foretold a return to relevance for the team with the goofy name that had been adopted by the City of Oakland back in 1971.

The process hit its peak in 2012 when Steph Curry and Klay Thompson refined their Splash Brothers act, coach Steve Kerr subtly brought sabremetrics to the offense, and the Dubs' became the NBA's latest juggernaut.

Of course, with big success comes big-bucks temptations, and the Big Tech owners of the club decided it was time to move uptown:

Kinda like going from Green Day to Tony Bennett.

Toss in the perspective from some quarters that Kevin Durant signed on because he's a ring-chaser, and the Dubs' lovable luster began to change its hues to corporate gold.

This spring, the warm-&-fuzzies have been reserved for the Raptors.

Canada's team has been knocking on the door of extended playoff runs for the past couple of seasons, only to be LeBron'd both physically and mentally.

So they went into radical mode, tearing down success in an attempt to achieve greater success. Their biggest decisions:

Hoop ops prez and GM Masai Ujiri turned into a riverboat gambler estraordinaire with his personnel moves, and as a result, his star's rising as quickly as the Raps' North American profile.

Thus, this crew is more than just Leonard & a Cast of Thousands. They're deep, versatile, and have the sorta plug-along, workmanlike ethic that the Oracle mystique could appreciate:

It could well be that Thompson coulda extended this to a Game 7 had his ACL not snapped. The Dubs are beyond resilient, but losing two key players in Kevin Durant and the ex-Coug was too much.

Especially with the Dubs continuing to, among other sins, treat the rock like a beach ball.

As it is, NBA at the Oracle is now history, and it's leaving a bitter taste. Golden State's move across the Bay without two healthy stars for a season will be a test of bourgeois bandwagoneers' loyalty.

Up North, the task will be keeping the crew together, both on the court and in the front office. That may prove to be just as challenging.