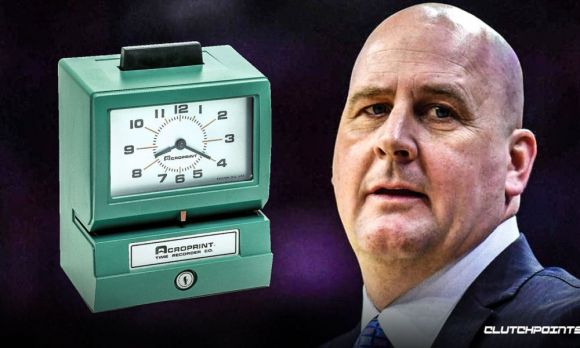 In case you're just checking in with the brand new NBA season, Jim Boylen is still the head coach of the Chicago Bulls.

His Bulls currently sit at a dismal 1-4 after a road loss to the Cleveland Cavaliers, one of the few teams they could actually beat on a consistent basis last season.

Despite this relentless ineptitude, Boylen continues to run a bunch of weird shit up the flagpole to see if it'll salute.

His latest innovation is a factory-style time clock located inside the team facility where the players are expected to punch in and out.

You know, for work.

Because that is precisely what a 20-something professional athlete wants to hear from his head coach.

Obviously, there's nothing wrong with trying to instill a work ethic, but pretending that your NBA team is working on an assembly line is just one blue collar metaphor too many.

Jim Boylen installing a time clock at the Advocate Center for Bulls players to punch in is the most Jim Boylen thing yet. (h/t @DarnellMayberry) pic.twitter.com/Wcm3KioqqY

Where does the time clock fall on the Jim Boylen spectrum? #Bulls

Incredibly, his players seem to be receptive to the idea, results on the court notwithstanding.

Apparently, morale has significantly improved since Boylen pretty much alienated the entire team with his Gestapo tactics when he first took over.

The Bulls are a very bad basketball team right now. 4 games in, 1-3, blown 10 and 18 point leads to Charlotte and New York.

There's too much talent on this team for them to be this bad.

And that's on Jim Boylen.

The Bulls get what they deserve for putting an intriguing collection of talent into the hands of a massive dipshit like Jim Boylen.

Big Jim will probably try to incorporate this war analogy into a valuable lesson for his young team.