In the NBA, 'Staggering' Is 'Load Managment' Lite 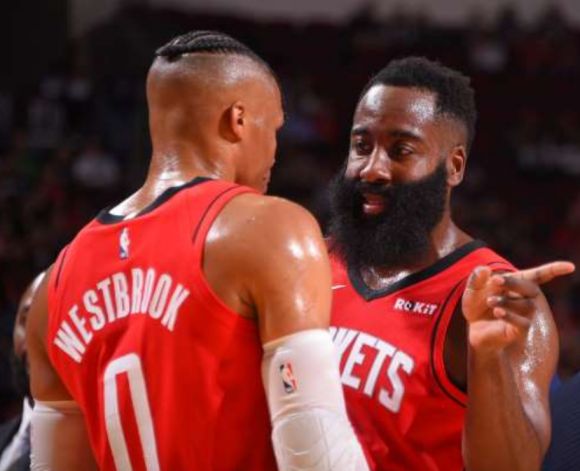 Ever since the Chicago White Sox and Los Angeles Chargers decided to put names on the back of jerseys back in 1960, you can tell the players without a program.

In the NBA these days, you can't tell when the players will be on the court without a schedule.

Now, taking it one step further, you need to play closer attention to the score and a team's rotation.

Now that the league's roster-building has downsized from Big Threes to Buddy Systems, teams are starting to fall into two groups as to how to best make the most outta their investment in star players:

This is a more fan-friendly method of assuring them that their tickets -- often shared with others in a pool -- will virtually guarantee to see the marquée names they anticipated seeing when they bought them.

As obvious as staggering might seem, it's a great way to keep the peace in a situation like Houston's.

The Rockets' big question when they picked up Russell Westbrook was how do they play with only one ball? So far,  a duly chastened Mike d'Antoni has been keeping at least one of them in action for every minute not classified as garbage time.

In essence, then, both James Harden and The Brodie have their featured moments.

Ditto for the Lakers.

Dudes have either LeBron James or Anthony Davis on patrol out there at all relevant times. That's not exactly rocket science, but if it works for the Rockets ...

Most of the clubs haven't bought into the stagger thing, yet. Whether that's because they don't have a Buddy System or haven't really drawn the distinction is still up for conjecture.

Portland, for example, keeps Damian Lillard and CJ McCollum joined at the hip. Make no mistake, dudes are buds, but they're home-grown and clearly feel their chemistry demands they be out there together as much as possible.

That duo's basically been a collective Energizer Bunny for the past few seasons, showing no signs of wear-&-tear as the season grinds on.

Whether staggering does anything for the Lakers or Rockets will be closely followed come springtime, as opposed to load management. It could well be the regular season's credibility will hang in the balance.