We Must Be Patient with James Harden's New One-Legged Shot 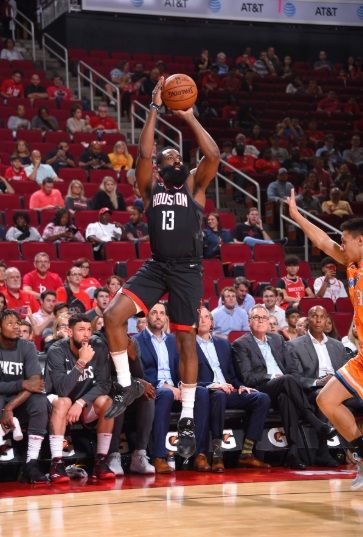 Let's be perfectly blunt from the outset.

James Harden knows more about offensive basketball than we do or ever will.

That being said, his brand new one-legged shot could use some work.

After dude teased this thing for months, we finally got a look at it in game action, albeit an exhibition against the Shanghai Sharks of the prestigious Chinese Basketball Association.

Fine, here it is:

James Harden promised he’d be debuting a new move this season and here it is...a running one-legged what the. this needs a name immediately. pic.twitter.com/O1BLxftDtd

While it obviously didn't fall, we do love the separation that move creates.

My humble bid to name the new James Harden move the “Stanky Leg” in honor of the timeless @officialgsboyz hit. pic.twitter.com/njDAlwYtXb

We don't know what that means.

NBA 2023: James Harden unveils his new move where he spins in a circle on his pivot foot until the gravitational pull forces someone to bump into him and he is awarded ten (10) points.

Brodie would be down with that.

In case you're wondering, Harden has successfully converted this shot in practice:

The Beard appreciates your continued patience.