In Case Anyone Was Curious, It Remains Business As Usual at the NBA on TNT Studio 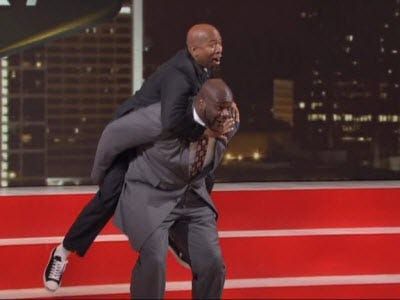 It's often said that good chemistry can't be faked or manipulated.

For fans of basketball and banter, this thesis statement is argued successfully during every single NBA on TNT broadcast.

These dudes could have a good time at a dairy farm foreclosure or even in the midst of an actual apocalypse, which they happen to be doing as we speak.

The fellas were in fine form recently, thanks to a viewer who really seems to understand the humor of the show:

“Underdog put that on a t-shirt.” 😂 pic.twitter.com/kTDim574MX

Yep, that one definitely hit the sweet spot, particularly for Shaq, who is admittedly easily amused.

Per usual, host and consummate straight man Ernie Johnson expressed concern for the big guy as he appeared to be convulsing at one point.

The viewer nailed this tweet so thoroughly that he received a separate appreciation tweet from Ernie, which seemed to validate his very existence:

you absolutely made our night! https://t.co/iJ9lUZ3Tkq

Of course, dudes are no strangers to this sort of frivolity.

In fact, that very same video wall has produced endless hijinks in the form of a recurring gag involving  Kenny the Jet and the Big Aristotle racing towards it.

Yep, that's the high level of sophisticated physical comedy that brings us back year after year.

And while we're on the subject of pants, there was the incident back in July when Shaq decided to go casual during a virtual session:

This could go on ad nauseum, but let's close with a classic involving Charles Barkley, a mysterious steam room encounter, and a bracelet.