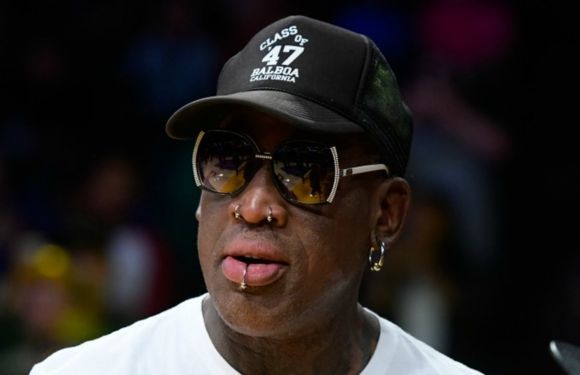 Well, Dennis Rodman managed to stay out of the news for almost two weeks, but the Worm has returned with a vengeance.

And shockingly, the news isn't good.

Somehow, the skilled rebounder and rabble rouser has survived 58 years on this Earth, which is certainly cause for celebration.

However, there appears to have been an unfortunate incident involving Dennis at the formal gathering to celebrate this momentous occasion.

Indeed, our best hope at peace with North Korea has been accused of striking a random guest at some point during his birthday extravaganza at a rooftop bar in South Florida.

Apparently, the guest in question is an extremely casual acquaintance who claims that the Worm slapped him twice for no apparent reason.

Of course we're discussing Dennis Rodman, so the search for reason is futile.

This is a man who once randomly kicked a courtside cameraman on live TV, so slapping some dude at a party is really not that big of a deal.

According to Rodman, he could have inflicted even more damage, which means we should be relieved.

Sadly, the former Mr Carmen Electra is still using this sort of twisted logic as he attempted to explain away the recent yoga heist with complete madness.

As far as this fresh incident goes, the owner of five NBA championship rings has denied everything through his attorney, who has clearly found his dream client.

Anyway, we'll keep you posted on any further developments in the case, or something new from Dennis, which should be any second now.