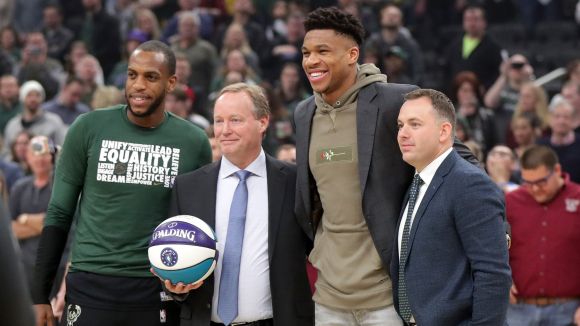 You really can't blame the MIlwaukee Bucks for being super-paranoid about the status of Giannis Antetokounmpo.

There has been much speculation regarding the future of the freaky one when he potentially hits the open market following the 2019-20 NBA season.

While he stills belongs to Milwaukee, every single rumor pertaining to his possible departure sends Bucks fans scrambling for the anti-depressants.

Knowing this all to well, GM Jon Horst recently attempted to assuage the fears of the freaked out deer enthusiasts:

Here's the clip of Bucks GM Jon Horst pledging to offer MVP Giannis Antetokounmpo a supermax contract at a town hall event, incurring a $50,000 fine from the NBA League office (via @fswisconsin)pic.twitter.com/xrp5DqqorC

Of course, the Association has a rather large bug up its ass regarding this sort of thing these days:

Bucks get hit with a $50k fine for discussing Giannis’ possible extension. NBA Commish Adam Silver, as we discussed yesterday, has decided to take on tampering https://t.co/SWZUlhpILm pic.twitter.com/F7upfRXlus

At this point, it's impossible to predict where the Freak will be plying his trade next season.

Multiple teams are interested in signing Giannis Antetokounmpo in 2021. Those teams include: