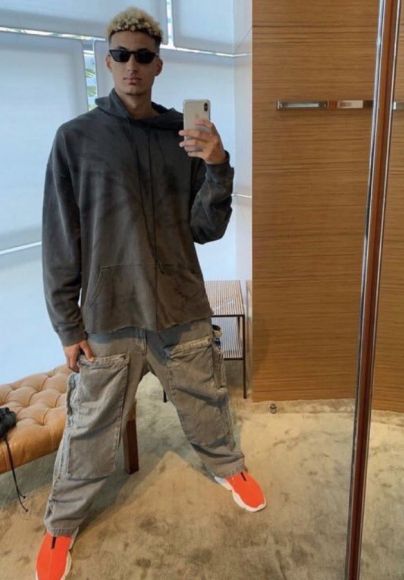 More so than the other major North American sports leagues, the NBA and fashion seem to go together quite nicely.

Players in the Association are frequently spotted before or after games wearing some interesting attire.

Of course, they can't all be winners.

Meet Kyle Kuzma of the Los Angeles Lakers, who recently made a series of extremely poor decisions involving what we'll generously call fashion.

Have a gander at this snappy little number:

Kuzma's outfit caused a stir in the comments 😂

Obviously, Kuzma shouldn't have access to this outfit in the first place, so the temptation to put it on would be eliminated.

But the real lapse in judgment was posting on social media, which gave his peers a means to attack.

Donovan Mitchell of the Jazz was convinced he was joking, while the Celtics' Jayson Tatum was concerned enough to call for an intervention.

Even new teammate Anthony Davis was confused, probably because he doesn't actually select his own clothing.

The common folk piled on as well:

Boy, we weren't expected a Kris Kross reference, but there it is.

Really was a messed up outfit.. looked more like you were just fucking around with people 🤣

Sadly, this appeared to be for real.

Only a guy named Marshall Mathers can get away with that kind of outfit..

Yep, Slim Shady could definitely pull that off.

That outfit @kylekuzma was wearing makes him look like a bum

You know, he does sorta look like a bum, or perhaps he's part of Mugatu's new Derelicte campaign.

Someone should probably warn the Prime Minister of Malaysia.