Anthony Davis Gets His Tinseltown Wish 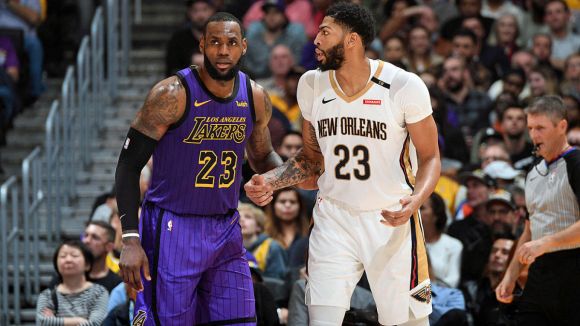 The only shocker in the inevitable announcement that Anthony Davis had been dealt to the Los Angeles Lakers was that he hadn't been commuting from there to New Orleans at the end of last season.

It's where he demanded to be traded, and in this league, the stars get their fondest wishes.

Like leaving the NBA's next big star in Zion Williamson for its biggest star, who frankly has maybe 2-3 good years left.

Then again, it's not breaking the league's heart that a successor to LeBron will be in place with one of its marquée franchises. This was gonna be either AD or Giannis, so now that drama's over.

That's a damn haul for the Pelicans.

The only trade in North American sports similar to this one that comes to mind would be the Saints' Mike Ditka giving away the team's entire draft for Texas Longhorns battering ram Ricky Williams.

Other than that, dude's just shifting from one messed-up front office for another.

After seeing firsthand that the Pels' management was run like a rudderless shrimp trawler, it's logical he wanted to put his future in his own hands.

Problem is, dude's going to a franchise where logic checked out a while ago.

Not sure how the Lakes can screw up a season with both LeBron and AD on the roster, but don't put it past them to attend a James Dolan seminar or something this summer so they'll be up to the challenge.

Next up for the Lakes is to locate a reliable point guard to replace Lonzo Ball, and their sights are set on Kemba Walker.

That's the same dude who actually said he'd take a pay cut to remain with the Charlotte Hornets. However, he confirmed that story with a sure, why not?

Aside from whatever episode breaks outta the Tinseltown soap opera, the intrigue could be what the Pels do to make sure Zion stays happen in the Crescent City.

They've got the bargaining chips after that haul they received for Davis.

Unfortunately for them, they also took on a volunteer advisor:

LaVar Ball on the Lakers trading Lonzo Ball: ‘I guarantee... it will be the worst move the Lakers ever did in their life and they will never win another championship. Guarantee it.” pic.twitter.com/Q1pxopsEdP

The Pelicans' title odds for next season may still be a tad long -- 60:1 --but they've got an awesome shot at a year-long Mardis Gras.