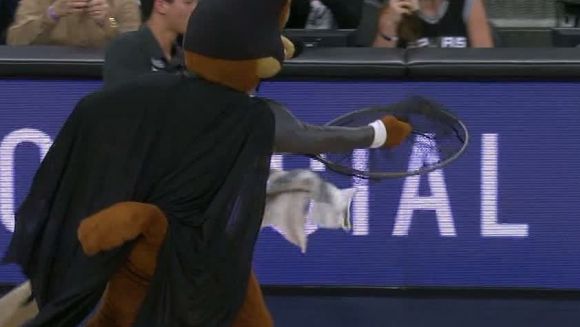 The AT&T Center in San Antonio has historically been a popular destination spot for local bats in the area.

These dreadful winged creatures have interrupted countless Spurs games over the years, but have been particularly busy this past week.

First, the Brooklyn Nets were introduced to the colony on Thursday during a 117-114 Spurs win.

But on Saturday night with the New Orleans Pelicans in town, things got really weird.

The harbingers of evil returned to the court, but a different type of creature decided to take a stand.

If you guessed Coyote, you would be correct, and possibly some sort of mascot fetishist.

Indeed, the Spurs mascot must've sensed there would be trouble on this fateful Saturday night, as he showed up in his vigilante power suit.

The bats return to the AT&T Center.

AND HE GOT IT!!! pic.twitter.com/ediKLkYheO

While the players, animal control, and even Gregg Popovich watched helplessly, Bat-Coyote made the ultimate sacrifice and gave us the hero we need, or deserve, or something to that effect.

The lesson here is simple, though.

Please stay out of Bat Country.