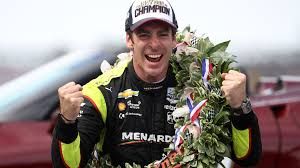 The French aren't generally known to have milk as their drink of choice.

So it was no surprise that Simon Pagenaud would rather shower in it after winning this 103rd running of the Indianapolis 500.

Team Penske had his Menard Chevrolet running hot all week, which made it ironic that his last-laps fuel conservation was a major element in his victory.

This is racing, so there's such a thing as crashes providing lucky breaks, and one of them is likely what sealed the deal for Pagenaud.

With 23 laps to go, Sebastian Bourdais and Graham Rahal kissed and slammed into the wall. The resultant caution gave Pagenaud the yellow flag he desperately needed to save fuel.

Rahal was less than pleased, but dude does snark well:

ARE YOU NOT ENTERTAINED?! #Indy500 pic.twitter.com/rXiUWhIDNS

Alexander Rossi had been leading the pack at that point -- going balls out -- so this could be considered a bummer from his perspective.

Dude reflected his anger in true Italian-American fashion, too:

Rossi also got blocked by Oriol Servia, who'd been lapped and apparently lost interest in where he was.

It called for yet another heated gesture, which is clearly one of Rossi's talents out there:

And he just encountered someone going 30 MPH in the left lane! pic.twitter.com/gwMunXjj9u

Put it all together, and the result is Pagenaud getting the checkered flag 0.2086 seconds ahead of Rossi after five lead changes in the final circuits.

It capped the first pole-to-pole victory since Hélio Castroneves did it in 2009:

This was the 50th anniversary of his first appearance at Indy. OG's made it a home away from home and put a remarkable stamp on it.

It also ran his latest winning streak here to two, as Will Power did the honors last season.

Another great achievement for Penske, then.

Meanwhile, Pagenaud's good with his name engraved in history ... and printed on the $2,669,529 winner's check.