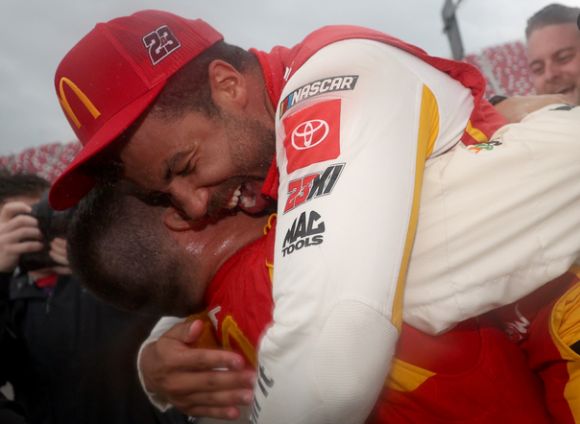 No word whether Bubba Wallace was wearing a pair of Air Jordans while he weaved and bobbed his way into the lead at the Talladega SuperSpeedway.

But he definitely had His Airness hizzownself and Team 23XI co-owner Denny Hamlin beaming with pride as he secured his first-ever Nascar Cup Series victory that was special for more than just personal reasons.

It can be argued dude's a bigger spokesman now.

Along the way, Wallace has transformed himself from kinda-villain to hero status. He's now added amplification to this by claiming the YellaWood 500.

Rain forced the Sunday race to be postponed and rescheduled for Monday, and even then, the weather wasn't much better. More wetness was always on the cards, one stoppage had already happened, and after 117 of the intended 188 laps, the skies well and truly opened.

That pretty much did it for the day's activities.

At least half a race must occur before it's declared official, so when it became obvious that no more racing could safely take place, it went into the books and Wallace had his victory.

And that brought the entire story arc to a fitting end: