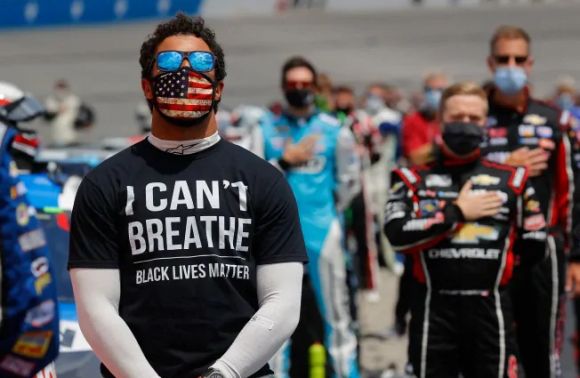 One way of putting this is Bubba Wallace is getting a tutorial on priorities during the Covid-19 pandemic:

NASCAR's only bro on the big circuit learned a lesson the hard way in the former, but he already knew there were too many lessons learned an even harder way in the latter.

And he saw no reason for a symbol of them to fly in his face every time he went to work.

Maybe NASCAR's history is steeped in the legends of bootlegging moonshine, but that all came 'way after the Confederate flag was flown in defiance of the nation it was trying to leave.

There's lotsa revisionist history about it that serves the agenda of certain narrators. The facts are the real Stars & Bars was actually another design, one that the Confederates actually flew during the Civil War:

It didn't morph into a truly toxic symbol until the mid-20th century:

Being real, maybe NASCAR's roots were in the South, but it's grown a hella lot larger since then. It stages races in 30 tracks across the USA -- counting Indy's road course as separate from the speedway -- and one in Canada. What's more, 18 of them are in states that fought to bring the Stars & Bars down.

The Canadians had a murkier role, but the upshot is it wasn't their war.

Bottom line, then, is Wallace had a point when he began wondering what the hell that flag was doing at NASCAR events.

Bubba was on his way to Martinsville for, ironically, the Blue-Emu Maximum Pain Relief 500 when he got the call from NASCAR's head office, letting him know what they just announced.

Virtually all of the other drivers were already on board with Bubba.

I will listen and learn. pic.twitter.com/bcNkq0Vglt

In the process, NASCAR picked up a few prominent fans, too:

Almost as ironic as Wallace celebrating his victorious cause at the event hosted by the sponsor who dumped him after his iRacing fiasco was the fact that Martinsville's short track hasn't exactly been the place in recent years where everybody just got along:

Maybe it was in the spirit of togetherness that this race broke that string of emotional red-lining. NASCAR's roots deserve to be remembered for their colorful origins, but those were in enterprising individuals trying to provide a product that was being denied to the general public.

That's a far cry from those who would deny a section of that general public their civil rights. The Confederate flag never had anything to do with NASCAR's origins. It was just something that hung around the perimeter with no one speaking up to ask why.

Until now. This was an oppotune time to ask it, for the benefit of all involved.

These are cooler anyways 🇺🇸 pic.twitter.com/GDp4ELUjpD