Zach Greinke Continues to Toy with Our Imaginations on the Mound 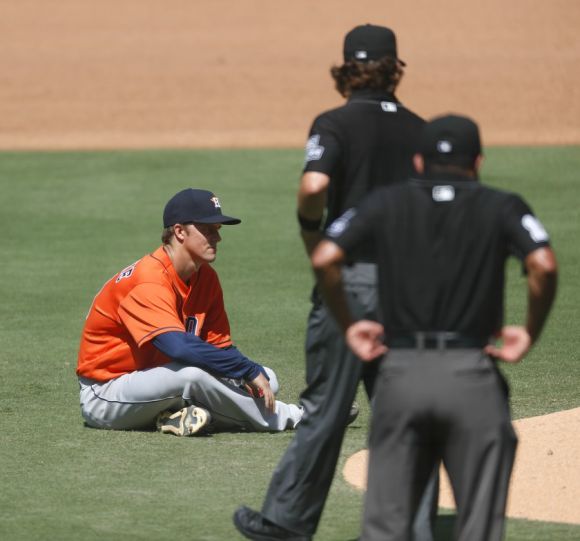 Sadly, there isn't much to be excited about these days, sports or otherwise.

However, the mere thought of Zach Greinke never fails to put a smile on our faces.

The most eccentric pitcher in MLB was at it again recently, opening up his big bag of whimsy and dumping it all over the San Diego Padres.

His Astros might've gotten swept, but that sobering reality wasn't going to ruin his good time.

Indeed, we'd gladly accept a golden ticket to explore the mind factory of Zach Greinke, but now's not the time for such things.

Perhaps in the off-season.

Meanwhile, dude was keeping it weird as only he can:

Zack Greinke just threw a 54 MPH pitch right down the middle and all Trent Grisham could do was laugh pic.twitter.com/nawzoWvMex

As you can see, even the victimized Trent Grisham was bemused.

So was the broadcast team, who giggled through the entire episode and was particularly impressed with that seed Greinke painted the outside corner with for the punchout on the very next pitch.

They were not alone.

Apparently, it turns out this particular eephus pitch wasn't by design, as Greinke and his batterymate got crossed up while Zach was calling his own pitches from the mound.

Our quirky hero couldn't decide between stepping off and pitching out, but the result was a combination of madness and brilliance.

Zach seems to toe this line often, like later in the very same game:

The best of the best pic.twitter.com/ujeMUn4xDC

That is absolutely a shot of Greinke sprawled out on the grass while the Petco Park people fix the mound per his specifications.

By the way, this was shared by his catcher Martin Maldonado, who is an extremely good egg.

And here's Zach earlier this season with some very 2020 specific humor:

Zach Greinke sitting alone in the stands between innings was the most predictable, yet hilarious Greinkification thus far.😂 #Greinkification #LoopHoles #ForTheH pic.twitter.com/bLsPnC2h2W

The fact that this incredibly likeable dude is employed by such a detestable organization will no doubt baffle scholars for centuries more.