You Know, This Yasiel Puig Character Is a Bit of a Hothead 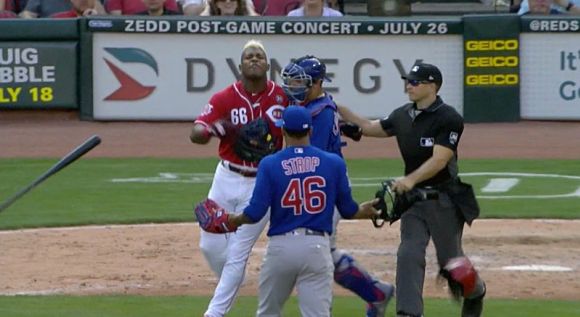 In a development that will shake MLB to the foundations of its very core, Cincinnati Reds OF Yasiel Puig was involved in an altercation during a game against the Chicago Cubs.

We can certainly understand if this news makes you ask important questions about life, love, and baseball, so we'll take a moment to process this information.

The explosive Cuban has been with the Reds for only a short time after the Dodgers cut bait, but he's managed to locate all sorts of mischief against a number of teams.

Our latest installment occurred late in the Reds' eventual 6-0 blanking at the hands of the Cubbies at home.

Puig was at the plate in the bottom of the eighth inning with a base open, facing a three-ball, no-strike count.

Well, in this context, it doesn't take a voracious reader to figure out what's coming next.

As always, the difference in perspective between the two broadcast teams is striking, but each side seems to agree that the entire production is just a complete waste of time.

Puig did appear to be courting disaster with his casual manner at the plate, almost trying to provoke Cubs reliever Pedro Strop into a response.

Well, dude was more than happy to oblige.

Afterwards, he expanded on his thoughts:

Pedro Strop was confused as to why Yasiel Puig got angry:

“It’s no secret, he’s stupid. He’s stupid as (expletive). Nothing against him, he’s just stupid.”

Pedro gets bonus points for his brevity.

Of course, our angry friend in the other dugout has already been suspended this season, receiving a two-game sabbatical for his aggressive role in that little skirmish with the Pirates back in early April.

And volumes have been written on his star-crossed romance with Madison Bumgarner.

Unfortunately for Puig, once a reputation is developed, you're not getting the benefit of the doubt from anyone, so the target will only continue to grow.

Yasiel Puig and David Bell have both been ejected.#BornToBaseball | @Reds pic.twitter.com/evgzOjCBWT

Yeah, that's not helping, either.