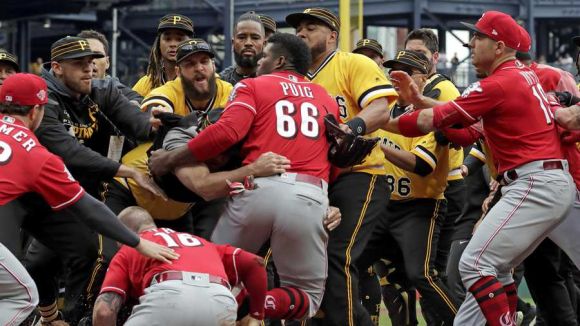 So there Derek Dietrich was, just standing there, minding his own business, and admiring his good work.

Awkwardly, P Chris Archer and his Pittsburgh Pirates teammates had to wait for him to do it.

In most parts of the baseball-playing world, such displays from hitters are accepted as part of the game.

In MLB, they aren't:

There's more to this than simply Dietrich going bridge and being the first one to admire it.

Dude had faced Archer back when they were with the Marlins and Rays, respectively. His record against the then-Tampa Bay ace during their annual underwhelming interleague series: 4 punchies.

Thus, this was the first time Dietrich had ever put a ball in play against Archer.

Upon further scrutiny, it seems Archer was merely sending a message. Dude's got pinpoint control for the most part. If he was launching a full-on scud-to-butt flight path, it woulda been a hella lot closer than that.

Odds are both dugouts and bullpens knew that, which likely woulda meant a return to actual baseball.

However, there's a rule these days that demands an umpire nip escalations in the bud.

So, even if Archer didn't follow up with a menacing stare and Dietrich didn't immediately charge the mound, the plate umpire did his regulatory duty and warned both dugouts about headhunting.

That's what brought Reds' skipper David Bell charging out there. Dude was upset that blue assumed there would be a Cincinnati retaliation, likely when Archer came to the plate. Blue was likely correct.

Where a true leader goes, his charges will follow, and it was as on as a vanilla basebrawl could be.

But with Yasiel Puig in the house, nothing is vanilla.

Especially when he goes into berserker mode. Dude woulda made an awesome Viking extremist. This isn't exactly an isolated incidence in Pirates-Reds history, either. Not by a long shot of greater distance than Dietrich's 436-footer.

Here they are getting up close and personal in August 2015:

These teams have 13 games remaining on their schedule this year, with the next series being in Cincinnati for four games, Mon-Wed 27-29 May, with Monday's being a double-header.

There's no doubt memories will last that long. Whether anyone thinks further festivities will be worth is another matter, and will continue to be a variable depending on what's left to play for as the season goes on.

With Puig as tinder, though, this series could be only a wisp of an incident away from another ignition.