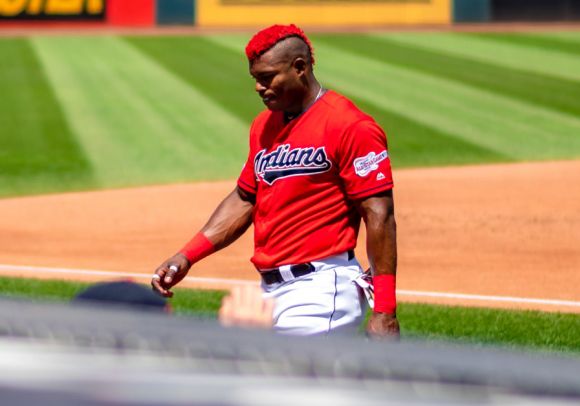 Things have been conspicuously quiet on the Yasiel Puig front.

Since the trade that sent him north through Ohio to Lake Erie, the entertaining outfielder has flown mostly under the radar, with the notable exception of that blown kiss to the Twins.

But Puig will be Puig, so it was inevitable that his effort would eventually be questioned again.

The former Dodger and Red recently raised the ire of manager Terry Francona with his casual handling of a groundout.

Brace yourself for the unparalleled excitement of a comebacker to the mound:

Yikes, that really doesn't play well with the home folks.

Puig may very well be the laziest dude in the state of Ohio, which would put him in the running for laziest in the Midwest, although he did hustle on that double.

He was almost to the dugout when the out was actually recorded, as the puzzled look on Twins pitcher Jake Odorizzi would suggest.

The mad Cuban was immediately confronted in the dugout by Tito and catcher Carlos Santana.

Yasiel Puig apologized to Terry Francona and Carlos Santana for not running out the ground ball in tonight's game. pic.twitter.com/XwhsktPBgq

Of course, Puig does have a history with this sort of thing dating back to his time in LA, where he's admitted that his work ethic wasn't exactly stellar.

Quote of the night -- Puig was asked if this was 1st time he'd been pulled from a game: "I don't remember. You'd have to ask Don Mattingly"

Donny Baseball was his manager in LA before Dave Roberts, and not the biggest Puig fan.

We can't imagine why.