Puig's Final Hits with the Reds Are with His Fists 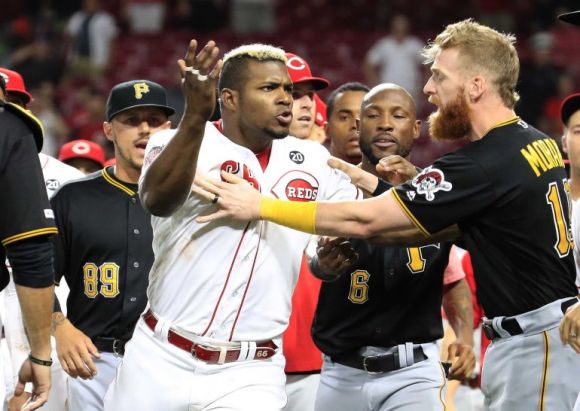 This is how one rises to an occasion.

Legendary Dodger broadcaster Vin Scully gave Yasiel Puig the nickname Wild Horse, and dude lives up to the moniker every chance he gets.

Dude's latest performance came at the strangest of times.

For the 2nd time this year, Yasiel Puig is in the middle of a Reds-Pirates altercation.

This happened just moments after it was announced that Puig was traded to Cleveland on Twitter. pic.twitter.com/7j4zhoFODC

That could damn near qualify for inclusion over at HockeyFights.com.

Looks like the Cardinals-Cubs rivalry's gonna have to step it up.

The Reds and Pirates have a history of this, anyway. In that respect, this is merely the latest chapter, so feel free to enjoy it in vivid detail:

Looks like Cleveland's gonna have to come up with a heated rival to really get full value outta this trade. They're on a relentless charge to catch the Twins -- from double-digit GB to only three out -- so maybe they'll have to do.

Otherwise, this was the twist to a trade of two big names -- and a hot prospect -- whose numbers this season haven't matched their celebrity.

The San Diego Padres got brought into the deal for fair-value reasons, and they wound up with Taylor Trammel, a Billy Hamilton-type OF. Of course, the Reds let Hamilton go, too.

This was a definite upgrade for the Padres, who just keep cruising toward contention as early as next season.

As sudden as this trade seemed to be, and according to Reds OF Jesse Winkler's reaction, it was sudden ...

... it had to be a while in the making for the number of players involved in the swap.

Incidentally, the kid pronounces it trah-MELL; quite obviously not related to the Detroit Tigers' Hall of Famer.

As to Winkler, dude adjusted in a hurry:

"Cincinnati is the better city in Ohio."

The Reds gave up a lot for Bauer, then, which is the first clue they still intend to make a pitch for the playoffs. Tall order. Dudes are six games off the pace in the NL Wild Card race -- and seven out in the NL Central -- with at least five teams to jump over.

But hell, that's why they play the games. Miracle runs happen in baseball.

Better yet for high drama this season, playoff chase or not, the Reds and Pirates meet six more times this season, three at the very end. Who knows where Bauer might toss a ball then?