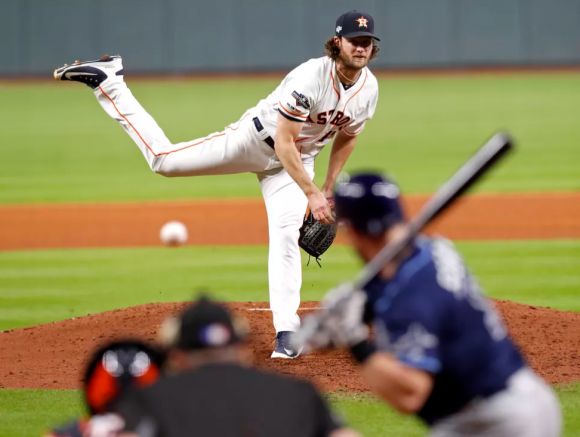 Who knew Thomas Wolfe was talking about the 2019 World Series when he penned the title, You Can't Go Home Again?

If that continues to be the case, maybe it's time to lay a play on the Washington Nationals.

Only because they're the team with four road games in this Fall Classic.

However, after Houston's Astros orchestrated another dominant performance in Game 5 like they did in Game 4, that'd be a ballsy call right now.

These two victories are virtually mirror images of each other. Only the names have changed:

Even the scores were almost identical.

Houston just throttled down a run in this one as they took control of the Series with a thorough 7-1 victory.

Ironically, it took a totally brilliant outing by Cole to overcome what was the major storyline: Max Scherzer had been scratched due to neck spasms.

Washington manager Dave Martinez was forced to quickly appoint Joe Ross as his starter for the latest most important game in franchise history, hoping the Padres' first-round pick in 2011 would offset Cole and pitch the game of his life.

If there's a silver lining for Washington, it's that their NLDS clash with the Dodgers gave them a bitta do-or-die experience as the road team in an elimination scenario.

They had to win a pair there, too, to prevail.

True, one of those was at home, but that now seems inconsequential in what's becoming one of the stranger World Series ever played.