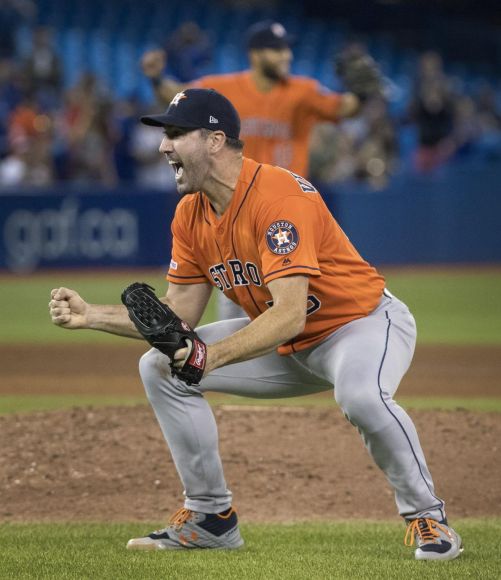 Baseball as it's played today makes a complete-game no-hitter even more of an accomplishment.

First of all, most trainers and other biomechanical staff continue to believe that 120 pitches an outing is the red line, healthwise. After that, a full recovery between regular starts can become an issue.

This explains why, this season, two of the three no-no's thrown until now this season were combined efforts:

Secondly, MLB now dictates that to be credited with a no-hitter, a chucker or committee thereof has to do it in a complete game. Thus, if it goes into extras and a hit is allowed, it's still not a nine-inning no-hitter.

As usual for him, this blanking of the Toronto Blue Jays was a picture of efficiency, which happens when 14 punchies are registered:

Dude thus joins this list of luminaries with three or more no-no's in their careers:

And what would a feat like Verlander's be in these sabermetric times without a red-headed stepchild stat tossed in?

.@JustinVerlander is the first pitcher ever to throw TWO no-hitters in the same road stadium (Rogers Centre). pic.twitter.com/9Iqw2hSOzx

If anyone appreciates Ryan's ringing up seven no-hitters, it's Verlander. Dude's lost four others in the late stages:

Speaking of the 120 pitches, it may have been a good thing Verlander had a bitta extra rest. Dude was ejected in his previous start against Tampa Bay.

To notch a complete-game no-no anymore, seems like every little thing helps.