Angels Pay Respects to Skaggs, No-Hit the Mariners as Part of the Tribute 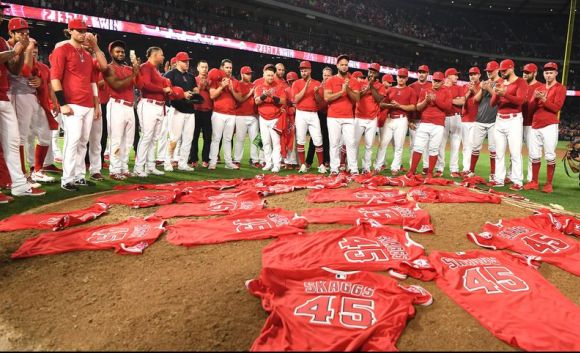 The autopsy results haven't come back yet, so no one yet knows why Tyler Skaggs died in that Texas hotel room.

The purpose of a funeral is to set a focal point on closure and the acceptance of reality, but in the sporting world, that's seldom enough.

In that light, the Los Angeles Angels organized a touching pre- and post-game ceremony that symbolized their appreciation for the time Skaggs spent with them.

And in-between, they did something that Skaggs or any other pitcher would truly appreciate.

It's the second time in team history the Halos have done that to Seattle, incidentally. Mark Langston and Mike Witt joined forced to do it in 1990. This time, they only needed one brilliant defensive play to keep it going:

Granted, Mike Trout can and does do stuff like that to any opponent, but more often than not, he's at his best in special instances.

Going bridge and later doubling in the first inning to the tune of 454 feet and four RBIs set the tone that this game was one of those times.

Conversely, these games have gotta be awkward for the opponent.

They're just sorta there when something bigger is happening and the game itself is secondary, as if they're intruding on it. If ever there's a low competitive ebb, that's gotta be it.

And of course, it's the Mariners, so they wind up unintentionally doing the Washington Generals thing and adding to the luster of the occasion.

Tragically, the Angels have been here before:

It never gets any easier to accept, and it never will.