Published on 3-Aug-2019 by Alan Adamsson 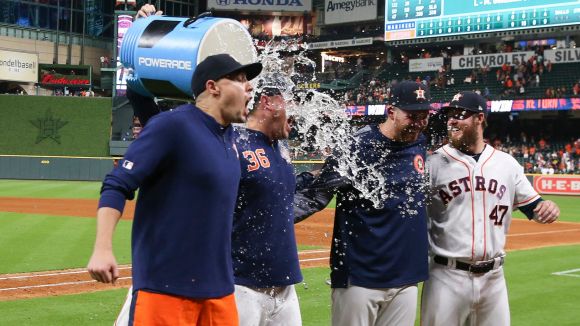 Maybe this feat should come with an asterisk.

Not because of the fact that on every given day ending in y, the Houston Astros own Seattle's Mariners.

Dudes are now 11-1 against them this season.

No, it's because the sad-sack Mariners have already shown that no-hitting them this season is just a tick or two above being just another day at the yard.

Well, Zack Greinke in a 'Stros kit, for one, but his services weren't even necessary for this combined no-no against Seattle.

It was two of Houston's other deadline acquisitions who headlined this combined effort: ex-Toronto Blue Jays Aaron Sanchez and Joe Biagini:

Full marks to those dudes, of course.

Their offense backed them up, because that's what it does. In this case, a 9-0 result underscored just what kinda day it was.

Sanchez and Biagini have still got to be pinching themselves, going from a Blue Jay squad that has its focus on 2021 or soon thereafter to a club that's so loaded right now, it damn near needs to be licensed.

The last time they made the playoffs was 2000, finishing second in the AL West and securing a Wild Card slot. Dudes swept the Chicago White Sox in the ALDS before the Yankees dropped them, 4-2, in the ALCS.

To their credit, Seattle never set out to tank a few seasons to emerge as constant title contenders like Houston did.

Of course, all that means is they haven't consciously tried. They seem to have natural tanking down pat.

When viewed in the cold light of harsh reality, the Mariners have now been no-hit twice in 23 days. There are a hella lot more days than that left in the season.

At this stage, for them, they're all daunting, but looming as specifically dangerous, Seattle still has road games in:

To be fair, the Mariners have better records right now than Baltimore, Detroit, Kansas City, and Toronto.

But as Richard M Nixon so eloquently put it, not everything in life is fair.

That particular list of teams will change from year to year. Seattle's situation doesn't.

And right now, Houston has four pitchers who are down with that.