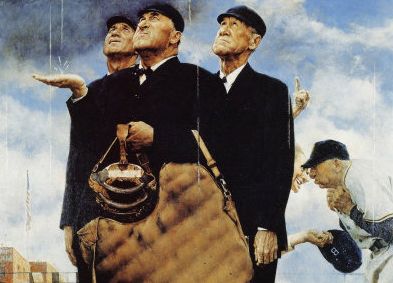 Back in 1954, one of baseball's perennial laughingstocks decided to change cities.

It's possible they were hoping their sad-sack ways wouldn't follow along.

It took a while, but that reputation has finally caught up with them.

The old St Louis Browns are probably best known for causing a sensation when they sent up a pinch-hitter whose strike zone was only three inches high:

The Browns' only moment of glory came during World War II, when they made the 1944 World Series against their St Louis counterpart, the Cardinals.

Of course, they lost, but one year later dudes were back to their ignominious ways when they made history by fielding the only one-armed player to ever hold down a roster spot in the majors. If that's not an indication that most men in their physical prime were overseas defending Western civilization, nothing is.

Maybe the franchise that's now the Baltimore Orioles won't be able to top all that, but it doesn't mean they can't try.

Since they've decided to spend these last few seasons in the tank has definitely accentuated the absurd.

The Jays certainly did.

In the first three games of last weekend's series at Oriole Park, Toronto outscored the hometown nine, 44-19. This included ...

Maybe when the SEC's power programs schedule cupcakes the week before their big games.

But that's another topic for another section.

Count the Orioles' ground crew in on this, for one game, at least.

Dudes got an unexpected day off in the top of the ninth in last night's rain-threatened game with the Yankees.

Proud professionals that they are ...

Within a minute, the downpour unloaded mass wetness upon the field of play, and no one was available to cover it.

This opened another set of metaphorical gates, as Tim Timmons was dumped on soon thereafter:

Not the only bad call he makes. pic.twitter.com/yIyCmXOyLA

Anything resembling Oriole momentum -- if it exists at all -- was lost. When play resumed, Brett Gardner wound up Texas Leaguing a double -- that's right, a soft-liner double -- to score a pair of teammates and secure a 4-3 win for the Bombers' third straight victory in their quest to keep pace with the Red Sox and Blue Jays for the American League's wild card slots.

Baltimore used to be in races like that in the before-times. If their tanking ways produces like Houston's did, maybe they will again.

For now, they'll have to settle for their ground crew knowing what they were doing, proving someone in that yard did.