The Cardinals Invoke Those Primitive Unwritten Rules Yet Again 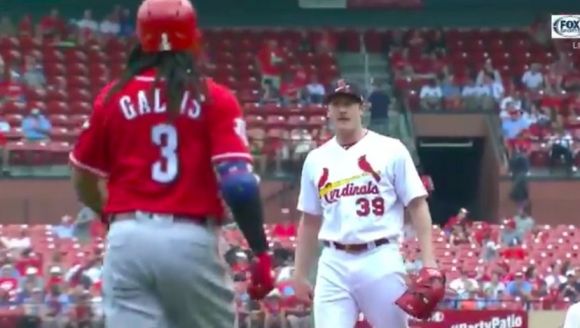 Okay, we're going to need everyone to stop what they're doing and pay attention for a moment.

Nothing's wrong per se, but the St Louis Cardinals would like to explain how baseball should be played one more time with the help of some unwritten MLB rules.

The subject is how to return to your dugout safely and without incident after recording an out.

Indeed, the Cardinals are getting sanctimonious again, all because brand-new Cincinnati Reds infielder Freddy Galvis decided to travel the shortest distance on his way back to the dugout.

Perhaps it will be easier to just show you:

Galvis ran across the mound and the benches cleared 😬pic.twitter.com/Aa1ghL5Tgx

That is some expensive daycare.

The two mature adults in the Cards broadcast booth pretty much articulated this archaic mentality with their boorish remarks, actually defending this nonsense.

Obviously, the Reds are more than happy to throw down at the drop of a hat, but this was the spiritual equivalent of two kids picking at each other in the backseat of a station wagon.

If only Mikolas had urinated all over the mound, then Galvis would've understood that the territory had been sufficiently marked.

Anyway, this baseball OCD thing is really getting out of hand.

Freddy didn't even remove his cleats.