The Atlanta Braves Broadcast Booth Is Filled with Boiling Rage, as Always 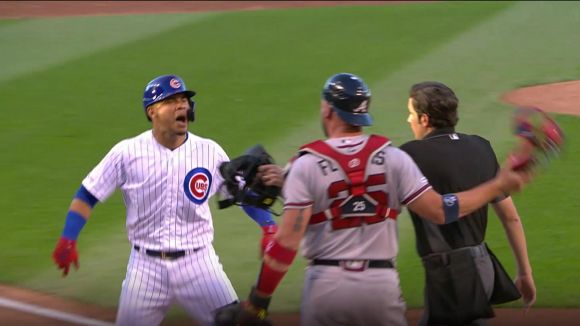 Those pesky unwritten MLB rules interrupted yet another ballgame the other night at Wrigley Field and also may have caused an aneurysm in the booth.

During a second-inning at-bat, Contreras wasn't digging the strike zone of the fallible human ump behind the plate and let him know about it.

Apparently, nosy parker Braves catcher Tyler Flowers had some thoughts on the subject as ... well ... resulting in a bit of chirpiness.

On the very next pitch, this went down:

As per tradition, we get vastly different reactions from the dueling broadcast teams, not to mention the accounts from the players themselves.

But Braves announcer and former MLBer Jeff Francoeur really seemed to be deeply disturbed by the whole episode, which definitely has nothing to do with any personal history with Contreras.

Lol @ Jeff Francouer saying he should have thrown a haymaker at Contreras. We all wish you would have @BleacherNation pic.twitter.com/Dl05C2d665

Yep, that would be a licensed team broadcaster retroactively threatening a player on the opposing team.

It sure the hell was, but Willy didn't seem to mind.

In fact, he seemed to be feeling sorry for the clearly troubled Francoeur.

First, Contreras let out a laugh, then responded... pic.twitter.com/RteLKcOKcl

It's almost as if Frenchy had misplaced his beret or something.

Actually, he may just be carrying on the angry tradition of world class curmudgeon Joe Simpson, whom he replaced in the booth.

Oh, before we forget, here's that personal history we mentioned earlier:

You know, Frenchy, it's difficult to land a haymaker when you're backpedaling.