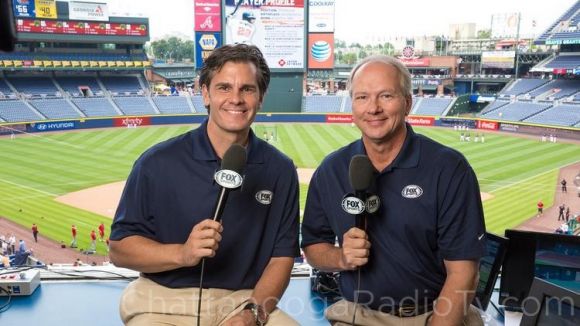 There is quite a bit of air time to fill during an MLB broadcast.

Many announcing teams choose to have a good time on the air while entertaining their listeners.

The Atlanta Braves broadcast team of Joe Simpson and Chip Caray don't fall into this category.

For some reason, this depressing duo decided to deliver a sort of weird eulogy to professionalism and Old School baseball.

Apparently, the fuse that lit this puritanical powder keg was the casual nature of the Los Angeles Dodgers batting practice attire.

What a colossal waste of perfectly good air time.

Why these two freedom fighters decided to take up this particular cause defies logic or reason.

Apparently, in the hazy world of Joe Simpson, being a former Dodger gives him license to make an issue out of a non-issue.

The use of words like unprofessional and embarrassing in reference to casual batting practice apparel is just plain silly.

In addition, Simpson specifically called out Chase Utley, who just happened to be wearing a charitable t-shirt that is helping fund cancer research as part of an MLB initiative.

Chase Utley repping his @MotteFoundation @kikehndez #KCancer shirt and showing his support for those in the fight against cancer. Looks pretty good if you ask me!!! Get yours at https://t.co/KQvhf1wDtf and join the fight. #KCancer pic.twitter.com/JstkXC0Yer

His impressionable partner even pursued the matter further afterwards via social media, although it appears his Twitter account may be disabled.

Suffice it to say, the Chipper further belabored the point, even suggesting that Vin Scully would agree.

Chip, in the future could you please refrain from using the name of Vin Scully in vain?

Despite their rag tag appearance during BP, the Dodgers somehow managed to defeat the Braves 5-1.

Afterwards, L.A. skipper Dave Roberts got wind of the remarks and shared his opinion on the subject.

Dave Roberts was legit pissed when informed about BattingPracticeTshirtGate.

“I take it personally when someone questions our professionalism,” Roberts said.

Indeed, stupidity should be a personal affront to us all.