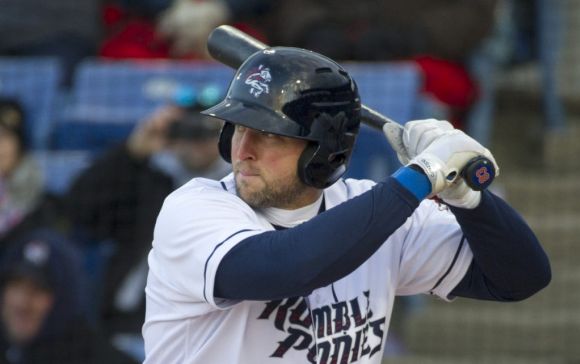 Virtually any seamhead will tell you that AA-ball is where the nuts are cut.

In the lower levels, prospects are hard swingers and harder throwers. They don't morph into hitters and pitchers until they advance to AA ... if they ever do.

That's the minor league level where those who've been in the game say you can start calling yourself a ballplayer and do it with a straight face.

Tim Tebow is playing for the AA Binghamton Rumble Ponies this season because that's where the New York Mets assigned him after a couple of years in the lower minors.

From the start, skeptics have been ... well ... skeptical. That's what they do. For good reason, it seems. But this is Tim Tebow, and this is his first pro AB:

True, while Tebow's new endeavor began as only it could, dude's been making progress.

If that didn't warm the left cockle of their Swamp-lovin' hearts, the news that their hero has not only become a bonafide ballplayer this season, he's made the Eastern League's All-Star team.

So what if his walk-to-punchie ratio is a Mark Reynolds-like 20:89?

Odds are if the Eastern League's own Midsummer Classic wasn't gonna be a sellout, it will be now.

After that triumphant feather in Tebow's résumé, there's only one thing left to do this season.

The cellar-dwelling Mets need to boost their bottom line, too.

It's good to be a ballplayer.